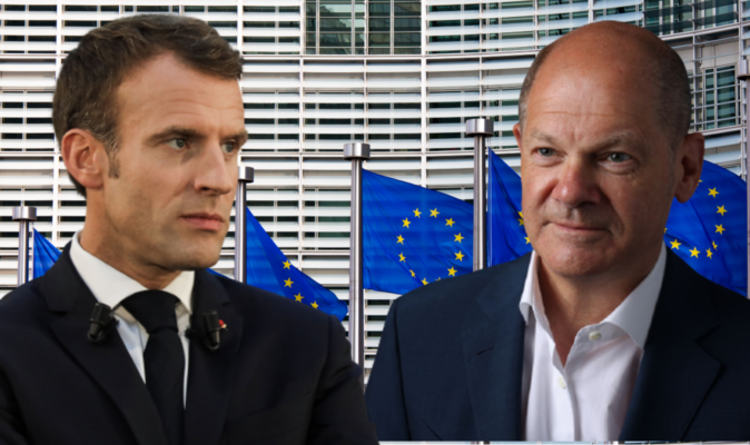 In a Tweet, French MP Jerome Riveiere, the Chair of the French Delegation at the ID group stated France would soon have to submit to the EU. He said: “In Germany, all political parties form a coalition with the common denominator of submission to the liberal and non-national EU.” He added: “Our country will be the first victim. Europe of nations, quickly!”

The MP’s rhetoric strongly condemned the supranational power of the EU, imploring that the European Union becomes separate sovereign state’s to save themselves.

Germany has remained a relatively silent voice since the elections which saw Angela Merkel end her 16 years in power.

With Olaf Scholz about to head a three-party coalition with broad plans for Germany’s transition to a green economy, Berlin’s voice is back on the stage.

The so-called ‘traffic-light’ coalition is expected to highly favour the European Union model, in particular surrounding green policies, and is something that sends shivers down the spines of a nuclear ambitious France.

With the UK having left the EU, ripples of discontent at the bloc are starting to make waves across Europe, with certain French influencers floating the notion of Frexit.

Paris has enjoyed the ‘caretaker’ role of EU leader since Ms Merkel stepped out of the limelight following the defeat of her part in the elections.

However, with the German’s emerging once again, a shift in the political nexus of the EU is expected.

France’s only saving grace in the matter is the upcoming Presidency of the bloc by France in the New Year.

Germany will be looking to set the tone when it comes to green policies under the new coalition.

It will be the first three-way alliance on a national level in German history and the first to put tackling the climate emergency, which will be a priority in each of the ministries, at the top of its agenda.

As part of the goal for Germany to become climate neutral by 2045, the parties have agreed to commit to phasing out coal by 2030, outlaw combustion engines in principle, and end gas power generation by 2040.

Renewable energies are to be expanded considerably, to cover 80 percent of all energy needs by 2030.

But the government’s most immediate challenge will be to control Germany’s worst wave of Covid-19 since the pandemic began, especially increasing vaccinations.

Mr Scholz said he would establish a crisis management team reporting to his chancellery, to be made up of virologists, epidemiologists, psychologists and sociologists, to advise on a way out of the emergency.

He said €1bn would be set aside to fund bonuses for health workers.

There is much speculation as to how the three parties will cooperate, owing to their considerable differences.

The Greens have pushed for a huge investment programme to fight the climate crisis, as well as to spruce up Germany’s out-of-date infrastructure.

During the election campaign, they pledged to raise taxes and loosen debt rules to free up money to cover increased spending.

For France, upcoming elections will see a rise in far-right and populist parties, with two major right-wing candidates expected to pile the pressure on Mr Macron.

With both Marine Le Pen and Eric Zemmour in the running to face off with Mr Macron next year, France will look to Germany to ascertain how a coalition might work together.

French priorities now lie at home, with a renewed surge in the Covid-19 virus likely to preoccupy the minds of the powers that be in the Elysee Palace.