Skip to content
HomeWorldMichel Barnier turns on Poland as he rages: ‘Do you want to stay in EU or not?’ 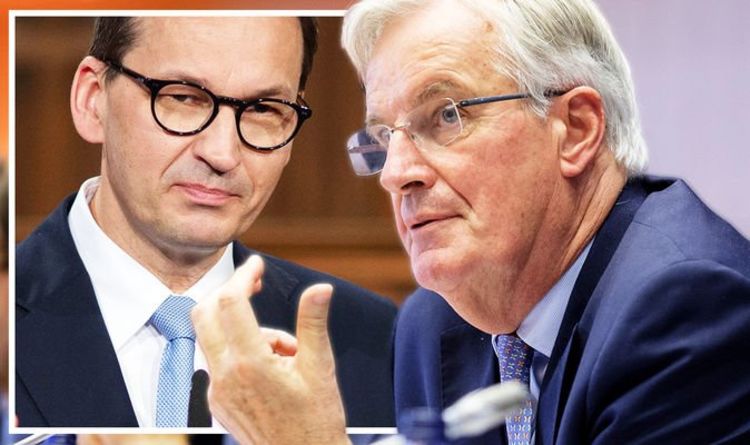 But the former European Commissioner has been branded a “totalitarian” and an “enemy of freedom” by a rival French politician. Mr Barnier was speaking after Europhiles staged mass demonstrations after a controversial legal ruling by Poland’s constitutional court inflamed tensions with Brussels.

The verdict, which declared parts of EU law to be incompatible with the Polish constitution, appears to put the country on a collision course with Brussels.

In an interview with French broadcaster BFM TV, Mr Barnier said: “In Poland it is not a question of law, it is a political question. It is very serious.

“The Polish people, the current government, is trying to coerce and frustrate justice. That is serious.

“That is why they say that the European treaties are against their constitution. This is very serious.”

Mr Barnier added: “This issue should be dealt with politically and the European Council, the Council of Heads of State and Government, should ask the Polish people whether or not they want to remain in the EU. “

European law applied in France because it had been accepted through treaties, Mr Barnier pointed out.

JUST IN: They STILL don’t get it! Brexiteer warns EU must cave to UK demands

In a clear message to Poland’s Prime Minister Mateusz Morawiecki, Mr Barnier said: “I think we should ask Poland if they want to be in the EU.

“They knew what they were doing.

“They accepted the treaties. Doing this now is extremely serious.

French MEP Philippe Olivier, a member of the far-right National Rally party who is married to Marie-Caroline Le Pen, sister of Marine Le Pen, Mr Macron’s probable opponent next year, tweeted: “Behind the allure of the nice guy, Barnier embodies the totalitarian vision of the European Union.

“They are basically the enemies of the freedom of the people.”

“They are basically the enemies of the freedom of the people.”

Mr Macron, who was elected in 2017, is hovering around the 25 percent mark in recent opinion polls.

Ms Le Pen is on 16 percent, as is centre-right challenger Xavier Betrand, seen by many as the candidate most likely to beat the former banker.

So far, Mr Barnier has made no significant impact in the opinion polls.

The first round of voting will be held on April 10, followed by a second ballot between the top two candidates on April 24.