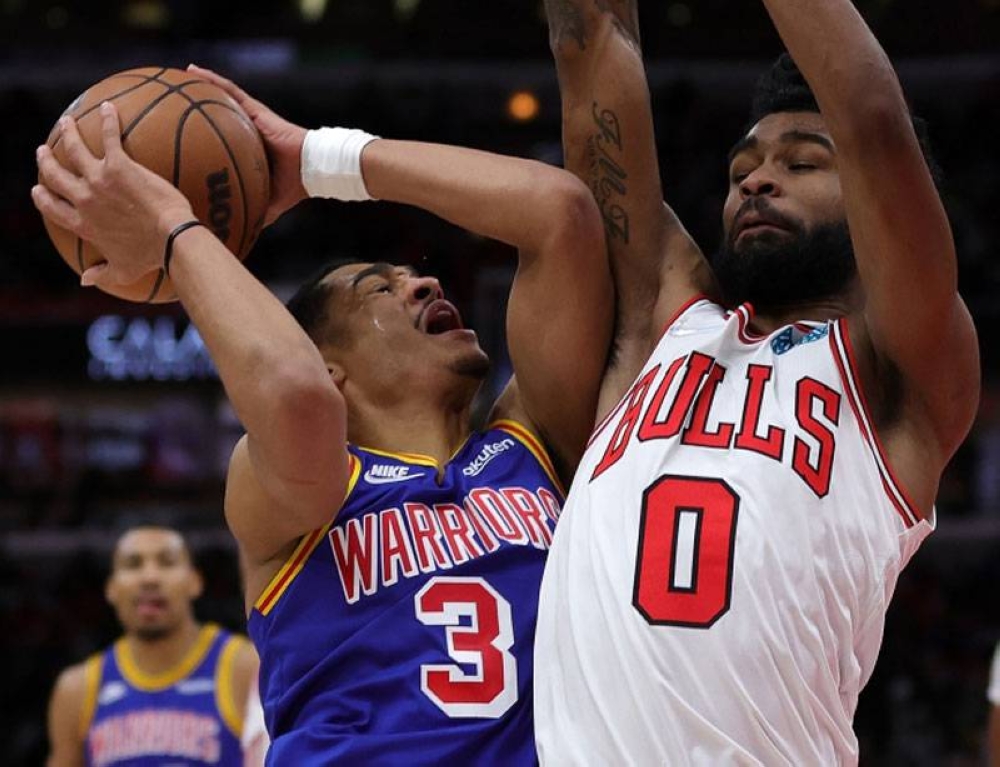 Jordan Poole (No. 3) of the Golden State Warriors is defended by Coby White of the Chicago Bulls during a game at United Center on Friday, Jan. 14, 2022 (January 15 in Manila) in Chicago, Illinois. AFP PHOTO

LOS ANGELES: Golden State busted out of a slump with their most dominant victory of the NBA season on Friday (Saturday in Manila), the Warriors continuing their mastery over Chicago by clobbering the Bulls 138-96 at the United Center.

Andrew Wiggins finished with a team-high 21 points and Stephen Curry delivered 19 as the Warriors rebounded from a 118-99 loss to the defending champion Milwaukee Bucks on Thursday.

The loss to the Bucks was the Warriors’ fourth in their last five games.

Rookie Jonathan Kuminga finished with 25 points and Jordan Poole scored 22 for the Warriors, who pulled away early to win their 10th consecutive game over the Bulls, including five straight in Chicago.

The Bulls problems mounted Friday after being blown out by the Brooklyn Nets two night earlier.

Already down a starting forward with Derrick Jones sidelined with a hyperextended right knee, Chicago lost All-Star Zach LaVine early in the game after he injured his right knee.

LaVine pulled himself from the game by committing an intentional foul. He appeared to injure the knee moments earlier while going for a rebound.

Nikola Vucevic had 19 points and 14 rebounds, Coby White added 20 points, and DeMar DeRozan scored 17 for the Bulls, who were booed off the court Friday trailing 78-47 at the half. They suffered their worst loss of the season.

The Warriors played without Klay Thompson, who was resting. Thompson is returning from a serious injury, so coach Steve Kerr doesn’t want to use him in back-to-back games.

Thompson has played in three games after returning from a 2 1/2-year absence with a torn ACL and an injury to his Achilles tendon.

Elsewhere, Joel Embiid carried the load offensively for Philadelphia, scoring 25 points and grabbing 13 rebounds as the 76ers beat the Boston Celtics 111-99 for their eighth win in nine games.

Embiid finished five points short of what would have been his ninth straight game with at least 30 points, which would have broken the franchise record he shares with Wilt Chamberlain and Allen Iverson.

Tyrese Maxey added 23 points, Tobias Harris had 17 points and Seth Curry scored 17 for Philadelphia, who bounced back from a 109-98 loss to the Charlotte Hornets on Wednesday that halted their seven-game win streak.

Jaylen Brown scored 21 points and Jayson Tatum added 20 points and 11 rebounds for the Celtics. Payton Pritchard came off the bench to score 17 points and Robert Williams tallied 12 points and 14 rebounds.

In Indianapolis, Devin Booker scored 22 of his 35 points in the third quarter and Deandre Ayton had 27 points and 12 rebounds to fuel the visiting Phoenix Suns to a 112-94 victory over the Indiana Pacers.

Booker drained a career high-tying six three-pointers to give Phoenix its fifth win in the last six games.