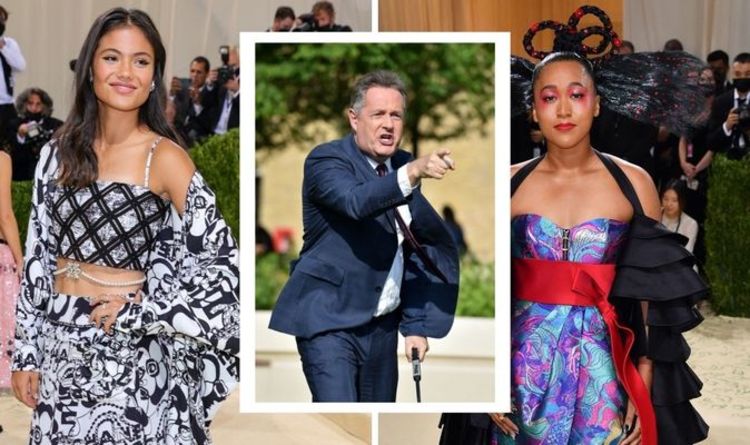 Piers Morgan has once again hit out at Naomi Osaka, this time for her Met Gala appearance. The four-time Grand Slam champion arrived as one of the co-chairs of the 2021 event, just weeks after admitting she didn’t know when she would play tennis again after losing in the US Open third-round. This time, he compared her to her “ever-smiling new rival” Emma Raducanu, the recent champion in Flushing Meadows, after being slammed for his comments on the 18-year-old’s mental strength during Wimbledon.

Naomi Osaka stepped out at the Met Gala last night, serving as one of the co-chairs alongside Amanda Gorman, Timothée Chalamet and Billie Eilish.

It was her first big appearance since a shock early exit at the US Open, after she lost to eventual runner-up and then-world No 73 Leylah Annie Fernandez in the third round.

The 2020 US Open champion has been open about her mental health struggles this year, announcing she would not attend press conferences at Roland Garros before withdrawing from the tournament and Wimbledon when the Grand Slam board thretened her with suspension – a move that has been heaving criticised by Piers Morgan.

The controversial TV presenter has previously slammed the former world No 1 for her decision to continue media appearances and engagements outside of tennis while wanting to take a break from press conferences.

JUST IN: Emma Raducanu ‘set for James Bond premiere’ after US Open win

**We’ll be bringing you the very latest updates, pictures, and video on this breaking news story.
For the latest news and breaking news visit:https://www.express.co.uk/sport/football
Stay up to date with all the big headlines, pictures, analysis, opinion, and video on the stories that matter to you.
Follow us on Twitter @DExpress_Sport – the official Daily Express & Express.co.uk Twitter account – providing real news in real-time.
We’re also on Facebook @DailyExpressSport – offering your must-see news, features, videos, and pictures throughout the day to like, comment, and share from the Daily Express, Sunday Express, and Express.co.uk.**