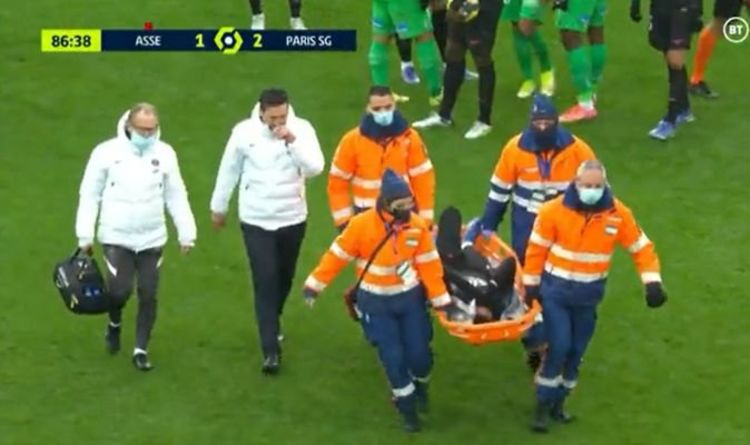 PSG superstar Neymar has sparked fierce concern after being stretchered off during Sunday afternoon’s tie with Saint Etienne. Coaches and chiefs watched on with worried expressions as the Brazilian is suspected to have suffered an ankle injury, which threatens to side-line him in their quest for domestic and European honours.

The Parisians were aiming to extend their mammoth lead at the top of Ligue 1 via a trip to Saint Etienne.

Three second-half goals, split between Marquinhos and Angel Di Maria, were enough to see them through to a 3-1 victory, but they did not have it all their own way.

A contentious sliding tackle saw the 29-year-old fall to the ground, immediately signalling to the medical staff for assistance.

Several minutes later, sporting director Leonardo was seen watching on with a distinctly worried expression as one of PSG’s prized assets was carried off the pitch.

Neymar has had his fair share of injury woes while in France, suffering a reported nine different spells on the side-lines since the start of 2020.

Fitness issues and adductor problems have already seen the winger miss a handful of PSG games this campaign, and his flair will undoubtedly be a big miss if the injury is as bad as expected.

Ligue 1 matters need not be a concern though, with Sunday’s victory taking them 14 points clear at the time.

As is so often the case with PSG though, the assessment of boss Mauricio Pochettino will boil down to Champions League performance, rather than domestic accolades.

In light of that, Pochettino’s reign got off to the worst possible start when PSG could not even achieve the latter last campaign – pipped to the league title by Lille.

They are also going about their Champions League business the hard way, with Wednesday’s defeat to Manchester City consigning them to second in the group.

Rumours of a fractious relationship between Pochettino and his superiors only lend further credence to the theory that the Argentine will abandon his post at the end of this season to join Manchester United.

The Red Devils have agreed to appoint Ralf Rangnick as interim boss until the end of the season, but Pochettino is certainly still in the frame to take over on a longer-term basis.