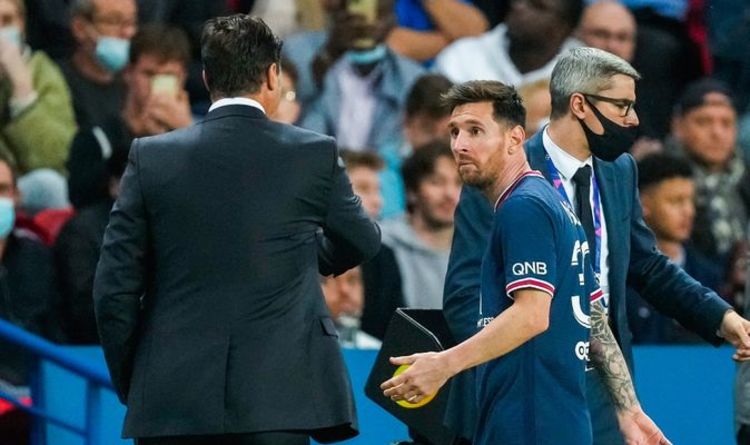 Paris Saint-Germain boss Mauricio Pochettino has had his decision to substitute Lionel Messi vindicated following controversy over the move during the club’s 2-1 win over Lyon. Messi appeared to be disgruntled by the decision of his manager but it has now been revealed that the iconic forward is injured and is a doubt for PSG’s Champions League clash with Manchester City.

The Ligue 1 side had incredibly fallen behind against struggling Lyon at the Parc des Princes before a Neymar penalty drew them level.

Iconic goalscorer Messi was then incredibly substituted as PSG chased a late winner.

The 34-year-old trudged off and appeared confused by the decision of Pochettino, with wing-back Achraf Hakimi put on in his place.

Pochettino extended a hand in an attempt to embrace Messi as the player walked towards the substitutes’ bench, but the Argentine did not engage.

JUST IN: Ronaldo ‘was rejected by Atletico Madrid’ before sealing Man Utd move

The PSG coach revealed afterwards that the decision was made to protect Messi from an injury and insisted that the former Barcelona star was content with the change.

Mauro Icardi was put on the pitch and he scored the winning goal in the final few minutes of the Ligue 1 clash.

But it has now been confirmed by PSG that Pochettino was correct to withdraw Messi because a scan has revealed an injury to his left knee. The six-times Ballon D’Or winner took a whack to his knee during the match.

A club statement updating the fitness of stars Messi, Marco Verratti, Sergio Ramos and Ismael Gharbi read: “Lionel Messi, following the blow received on his left knee, had an MRI this morning that confirms the signs of bone bruise, a new point will be made in 48 hours.”

“I took the decision to take Leo off to protect him from possible injuries. We have important games coming up and we want to protect him,” Pochettino said.

“These are decisions that we make for the good of the team. Everyone knows we have great players.

“Sometimes these choices pay off and sometimes they don’t. But that’s why we’re standing in front of the bench thinking about what to do.

“And those decisions that you have to make, whether things go well or not. Whether you like it or not.

“Afterwards, Messi told me he was fine with the decision.”