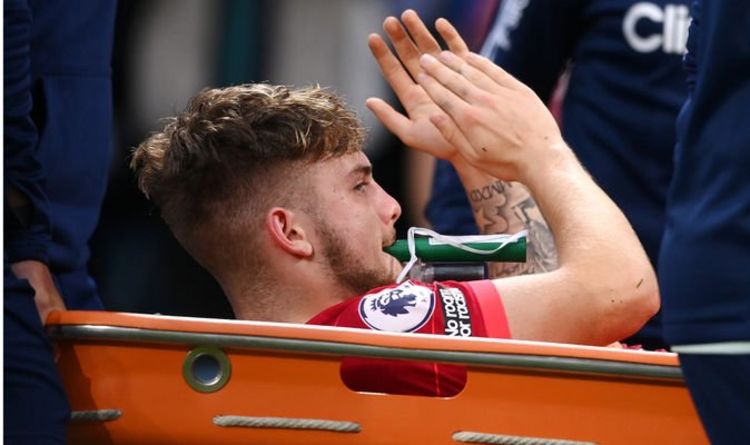 Liverpool starlet Harvey Elliott has spoken out on social media after sustaining a horror injury during the second half of the Reds’ 3-0 victory over Leeds United. Mohamed Salah immediately beckoned the medical team onto the pitch after a challenge from Pascal Struijk left the teenager in need of urgent attention.

Leeds defender Struijk was shown a red card for the challenge, leaving the Yorkshire side to face the rest of the game with 10 men.

Liverpool boss Jurgen Klopp was initially outraged by the tackle, although his post-match comments were markedly more composed after Elliott’s dislocated ankle was perhaps a more favourable injury than first feared.

“Neither was it a red card, just a freak accident but these things happen in football.

It was a cruel twist for Elliott, who has enjoyed a superb breakthrough with Liverpool after spending last season on loan at Blackburn Rovers.

Still just 18-years-old, Klopp is an open admirer of the young talent, and he featured in all four of the Reds’ Premier League game so far this campaign.

It remains to be seen how long the injury will keep him on the side-lines before he can get his season back on track.

Other midfielders who had primarily been watching on from the bench so far this season, such as Naby Keita or Alex Oxlade-Chamberlain, may now get a chance to state their case in Elliott’s absence.

After the game, Klopp said: “It is a bad injury. Ankle.

“I heard it was dislocated and we could put it back. He is now in the hospital.

“He is an incredible player. Now he’s out.

“Do I want a young boy having such an experience early in his career? No I don’t.

“Obviously, he’s a top player. I could see his foot was not in the right place. We were all shocked.”

The potentially long road to recovery begins now for Elliott, who has shown maturity in the way he has handled the aftermath of an unfortunate situation.

His positive reflection on the incident should also ease the mind of Struijk, who was understandably distressed at the injury his challenge had caused.

For now, the Reds must pick themselves up and dust themselves off in time to host AC Milan on Wednesday.