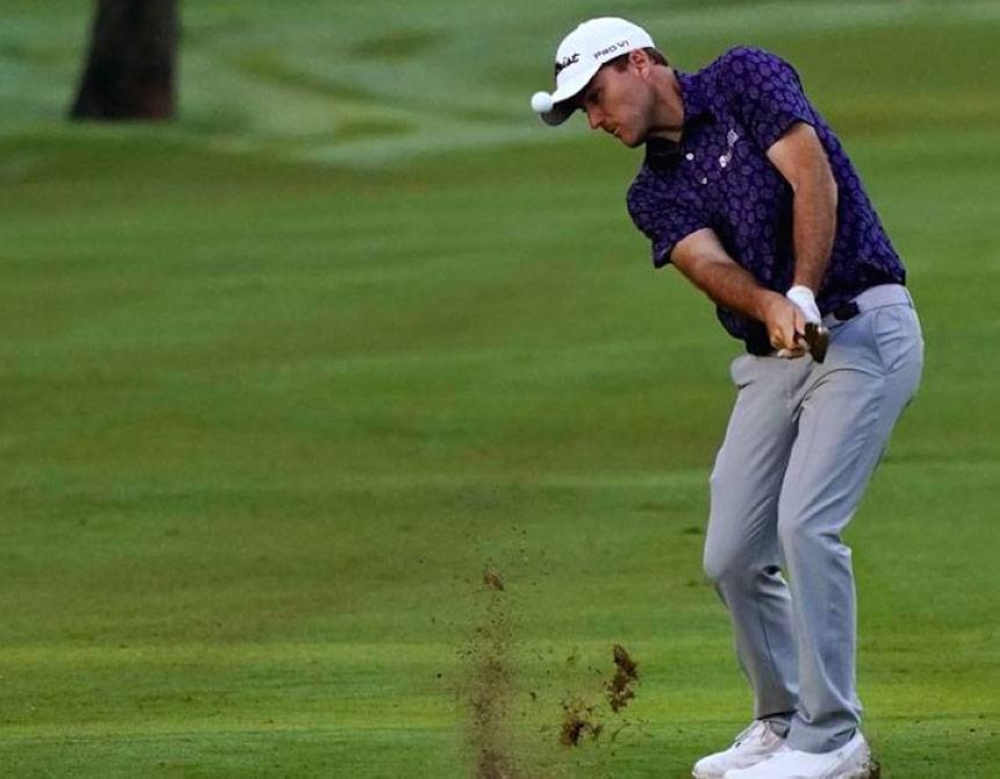 Russell Henley hits from the 10th fairway during the second round of the Sony Open golf tournament on Friday, Jan. 14, 2022 (January 15 in Manila), at Waialae Country Club in Honolulu. AP PHOTO

LOS ANGELES: Russell Henley fired two eagles in a seven-under-par 63 on Friday (Saturday in Manila) to seize a three-shot lead over China’s Li Haotong through two rounds of the US PGA Tour Sony Open in Hawaii.

Henley, who started the day tied for second behind defending champion Kevin Na, opened with a birdie on the 10th hole at Waialae Country Club in Honolulu, and after a bogey at the 16th he kickstarted his round at 18, where he holed out from a greenside bunker for eagle.

He gave back a stroke with a bogey at the first, then picked up six strokes in his last six holes — a storming finish capped by a 29-foot eagle at the par-five ninth.

“Nice to finish like that,” Henley said. “I don’t remember the last time I had two eagles in the same round, but it’s definitely exciting.”

Henley rolled in birdie putts of about nine feet at the fourth, fifth and seventh holes and an 11-footer at the eighth.

“The front I started hitting a few more fairways and giving myself some good looks and executing there from 10 to 15 feet or less,” added the American, who is chasing a fourth US PGA Tour title on the same course where he won his first as a tour rookie in 2013.

“First few holes [my game wasn’t] quite on, especially on my tee shot, but I played great on my back nine holes, a lot of putts and played super-solid,” said Li, who has one OneAsia tour title and two European Tour titles on his resume but is still seeking a first US tour crown.

American veteran Matt Kuchar, whose nine PGA Tour titles include the 2019 Sony Open, was a further stroke back on 11-under 129 after his second straight bogey-free round, a five-under 65 that included five birdies.

“Fortunately, I was finding a bunch of fairways today,” Kuchar said. “If you’re in the fairway you can make birdies. If you’re not in the fairway, you’re hoping to make pars.”

Na’s second round showed just how important finding the fairways could be with the rough at Waialae particularly dense and deep this year.

American Michael Thompson was alone in fourth after a 67 for 130.

Japan’s Matsuyama had seven birdies and two bogeys in his five-under effort and was joined on nine-under by 21-year-old compatriot Keita Nakajima, the top-ranked amateur in the world who carded a 64.

Matsuyama admitted it was a bit demoralizing to see Henley’s 15-under score on the board as he was grinding through his round.

“That’s a tough row to hoe when you’re that far back,” he said, adding that the way he was playing he wasn’t focused on what number he might need to post to stay in touch.

“I was all over the place the front nine, couldn’t keep the driver in the fairway,” Matsuyama said. “So I’m happy with how I finished.”