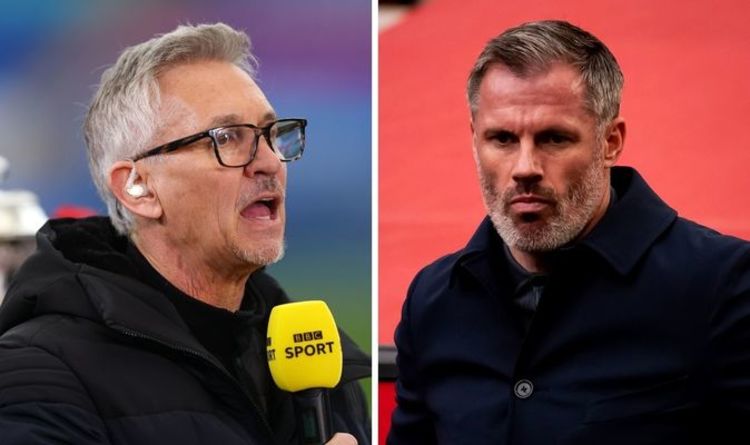 Jamie Carragher has hit back at Gary Lineker after the Match of the Day anchor dug out a mistake from Sky Sports’ Monday Night Football on social media. Former Liverpool defender Carragher and colleague Gary Neville became embroiled in an intense debate on last night’s show over who is the GOAT: Lionel Messi or Cristiano Ronaldo.

Neville, who played with Ronaldo at Manchester United, argued that CR7 was the greatest player within the history of the game and he argued that there were stats to prove it.

Yet as the graphic displayed the pair’s career honours, eagled-eyed fans on social media spotted one clear error.

The figures displayed that Messi was yet to win an international tournament, compared to Ronaldo’s two.

That is of course incorrect following Messi’s Copa America triumph with Argentina this summer against Brazil.

Lineker, who is one of Messi’s biggest fans, was quick to point out the mistake on Twitter.

He wrote, accompanied with a sarcastic emoji: “To be fair, it’s such a long time since Messi led Argentina to victory in Copa America, they’re entitled to forget it.”

Liverpool fan page Empire of The Kop then replied: “Ridiculous isn’t it – and one of the international trophies they’ve included for Ronaldo is the Freakin’ Nations League. Yet couldn’t include the Copa America. Nobody mentioned it either.”

Lineker then added: “Four Champions League as well, not three,” with a hand over face emoji.

Carragher, who was not even included in the conversation, then jumped in to intervene.

“We made a mistake on a graphic over Messi’s international honours,” Carragher said.

“We don’t have autocue on MNF so I’m sure you’d also make a mistake now & again.”

Lineker was quick to respond: “Yes, we do, and when they happen, they’re quite rightly pointed out.”

Carragher was not backing down and he then invited Lineker onto the show to have a go at presenting without autocue.

“Not by anyone on MNF, as we realise it’s not easy. I know you spend the majority of your time on twitter but just look after MOTD & we’ll do the same on MNF,” he added.

“If you ever want to come on with no autocue you’re welcome.”