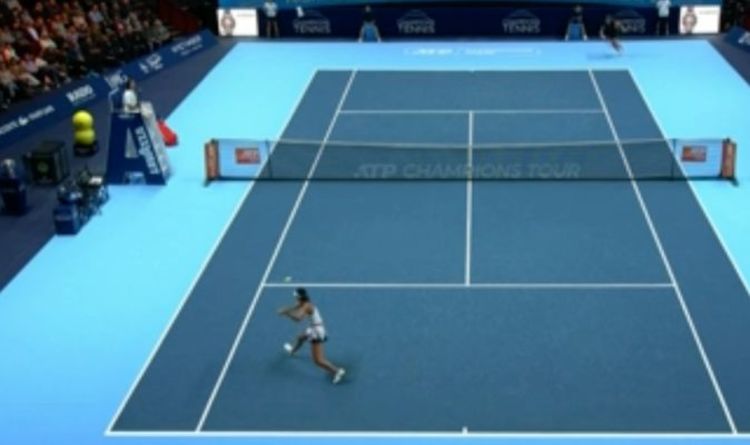 Emma Raducanu hit an incredible shot in her exhibition encounter with Elena-Gabriela Ruse which she was warned she would ‘get in a bit of trouble’ for if she repeated on tour. Co-commentator Claire Curran gushed about a sliced backhand down the tramline as the US Open champion took control against her close friend.

Raducanu and Ruse were involved in a tense rally in the third game of the first set, with the former forcing her opponent around the baseline.

The 19-year-old had already broken Ruse and was leading 2-0.

The Brit then switched up her game and produced an incredible sliced backhand down the tramline to win an excellent point.

It was a shot that co-commentator Curran loved.

The BBC’s main commentator Gigi Salmon reacted: “What a pick-out from Raducanu!”

Curran then suggested that she would not be able to risk playing the shot on tour, and that she was taking advantage of the fact she was playing in an exhibition match.

“All I can say is that she will never do that in a main tour match,” the former professional player gushed.

“If she does then I think she would get in a bit of trouble!”

Both players continued to play some excellent shots in a gruelling first set.

Salmon added: “Ruse is saying that she won’t need pre-season. She might be right if the rallies carry on like this.”

Curran then continued to analyse Raducanu’s performance as she eased into the lead.

“She (Ruse) is playing against a human backboard right now. Raducanu is absorbing the pace.”