Skip to content
HomeSportsConstantino edges closer to 3rd crown with 69 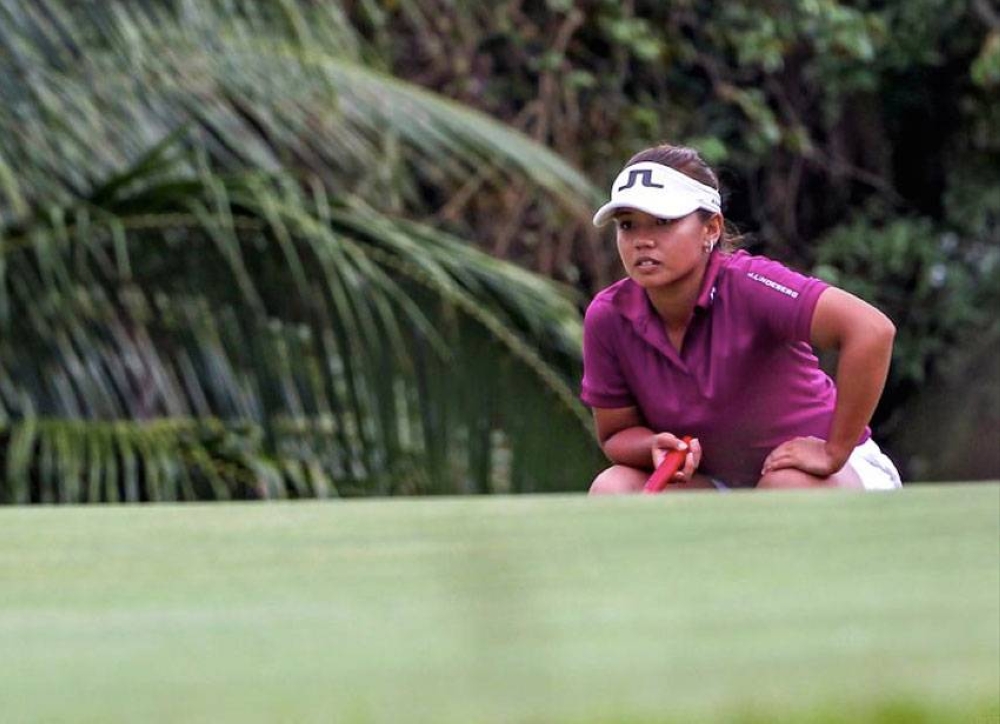 Harmie Constantino proved clutch as she shouldered herself past Mafy Singson and Chanelle Avaricio with a pair of birdies that put her on top by two and closer to another title romp after a 69 in the second round of the ICTSI Riviera Ladies Challenge on Thursday in Silang, Cavite.

Locked in a frenetic chase for the lead with Singson and Avaricio, Constantino outplayed the top amateur in the closing holes in the last flight, birdying Nos. 13 and 16 of the Couples course that went well with her opening 35 for the tournament-best three-under card that moved her 18 holes away from nailing a third crown in an impressive maiden pro season on a 141 aggregate.

“I played steady, hit a lot of greens but didn’t hole much putts,” said Constantino, who birdied Nos. 2 and 7 to negate a mishap on the sixth.

When asked what it will take to win again after struggling to finish fourth in harsh conditions at Tagaytay Highlands two weeks ago, the former national champion, who swept the Eagle Ridge-Aoki legs, said: “Consistency. Couples is tough, it’s shorter but tighter compared to the other championship courses.”

Avaricio, twice foiled for a breakthrough by absentee Princess Superal at Sherwood and Eagle Ridge-Norman last July, tied Constantino at two-under overall after a birdie on No. 15 in a flight ahead. But the Alabama State U product bogeyed the 17th and settled for a 71 to slip to second at 143.

“My game was much better than yesterday (first round). I just stayed patient and calm although I played careless on some holes,” said Avaricio. “But I’ll to do better tomorrow (today), I’m not expecting too much but I think patience will be the key.”

Singson, who matched Constantino’s opening 72 for a share of the lead, held her ground with a one-under card after 11 holes but lost her momentum and bogeyed three of the last six and reeled with a 74.

She tumbled to third at 146, now five strokes behind Constantino and in a tie with fellow amateur Laurea Duque, who shot the day’s other 70, and Chihiro Ikeda, who matched par 72.

“Not so good,” said Singson of her game which she actually kept in check with a three-birdie, two-bogey card after 11 holes. “But I missed a lot of putts, I had 3 three putts.”

Like Constantino, Singson, the back-to-back low amateur in the last two legs of the Pilipinas Golf Tournaments, Inc.-organized circuit, said emphasis will be on consistency in the final 18 holes of the P750,000 championship put up by ICTSI.

“I’ll try to play consistently, and not to miss the easiest side of the pins,” added Singson, who headed straight to the practice green to polish her stroke.

Sunshine Baraquiel, who ruled the Tagaytay Highlands leg in harsh conditions for her first win two weeks ago, fought back from a 76 with a 72 although her 148 put her seven shots adrift of the former national champion poised to nail a third crown after dominating the first two Eagle Ridge-Aoki stops.

Korean rookie pro Jane Jeong, meanwhile, fumbled with a 75 after a 74 for a 149 while Florence Bisera threatened to crash the big guns’ party with an impressive two-birdie feat after three holes, only to fade with a string of bogeys – seven – and finished with a 77.

She dropped to joint eighth at 152 with Marvi Monsalve and Daniella Uy, who also skied to a pair of 79s after matching 73s, and amateur Eagle Ace Superal, who battled back with a 74 after a 78.