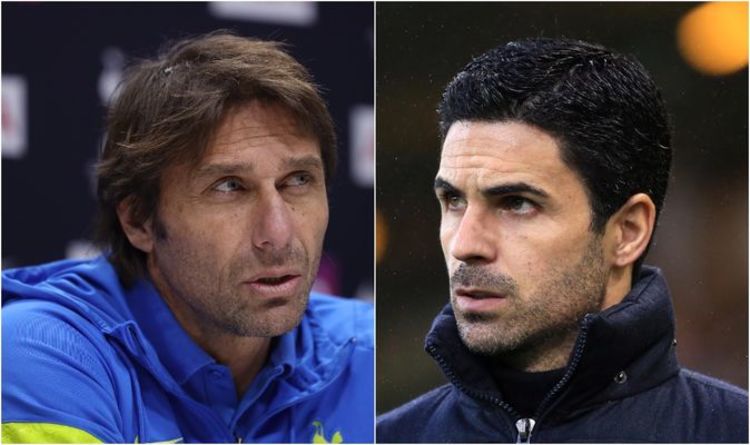 Arsenal have reportedly angered their north London rivals Tottenham by requesting to postpone this weekend’s crunch derby. After a spirited performance against Liverpool on Thursday evening, Gunners boss Mikel Arteta issued a rallying cry to his team ahead of the clash, which could have huge implications on the Premier League’s race for fourth place.

Arsenal seemed to be riding a more positive wave of team morale than their rivals going into Sunday’s scheduled meeting.

They dug deep to hold Liverpool to a 0-0 draw at Anfield on Thursday, despite going down to 10 men within the first half-an-hour.

Spurs, meanwhile, crashed out of their Carabao Cup semi-final with a whimper as Conte oversaw home and away defeats against his former employers, Chelsea.

With matters extremely tight in the race for fourth place, however, the Gunners are seemingly intent on postponing this weekend’s north London derby.

A statement from Arsenal reads: “We have reluctantly taken this step but we have many players currently unavailable across our squad as a result of Covid, injuries and players away with their country at AFCON.”

According to The Daily Mail, Spurs are angry with their rival’s decision, given that the match is due to kick off in less than 48 hours.

Covid cases, Africa Cup of Nations absences, injuries and suspensions have all hampered the Gunners’ crop of players to choose from ahead of the weekend.

Thomas Partey and Mohamed Elneny are both at AFCON, Martin Odegaard tested positive for Covid this week and Granit Xhaka’s red card would have left him suspended – to name a few.

Understandably, Spurs are seemingly keen to play their local foes in such a circumstance, given the bragging rights and Premier League implications that would come with a victory.

Tottenham are two points behind Arsenal in the table, but thanks to a host of Covid-related postponements of their own, they also have two games in hand.

A response to the request is expected on Saturday.

It comes despite a midweek post-match message from Arteta which suggested that he and his players were pumped up and ready to give it their all at the Tottenham Hotspur Stadium.

“We revel against the situation. The players showed great fight, determination, brotherhood,” he told Sky Sports after earning a draw at Anfield.

“You saw the emotion, we never gave up. Credit to the boys.

“The extra motivation to play a derby [at Tottenham on Sunday] brings the energy when you don’t have it. No excuses, we have to play it.”