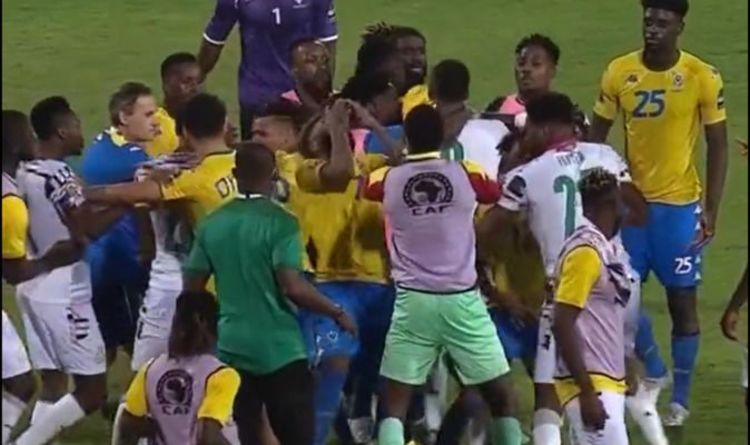 There was more drama at the Africa Cup of Nations [AFCON] on Friday evening when Ghana’s Benjamin Tetteh appeared to throw two punches after the final whistle against Gabon. The 24-year-old was then shown a straight red card, despite the full-time whistle being blown minutes prior after a dramatic encounter between the two sides.

Tensions ran high after the full-time whistle on Friday, with Jim Allevinah netting an 88th-minute equaliser for Gabon.

Ghana had enjoyed the lead for the vast majority of the match, with Andre Ayew opening the scoring inside the first 20 minutes.

But the late goal left Ghana floundering in Group C, having failed to win either of their first two matches at the tournament.

Gabon, however, were left in good shape as shared spoils means they have gone through their first two clashes without tasting defeat.

With Gabon erupting into jubilant celebrations at the full-time whistle after their late goal, Ghana’s Andre Ayew reacted angrily.

A cluster promptly gathered near the dugouts, and despite the referee’s attempts to control the situation with his whistle and yellow cards, the huge group of players and staff quickly got out of control.

The referee then issued a straight red card long past the final whistle, with the incident coming as the latest instalment in a host of dramatic events which have unfolded at this year’s tournament.

A Wednesday encounter between Tunisia and Mali was shrouded in farce when referee Janny Sikazwe twice blew the final whistle prematurely.

At first, the Zambian official blew for full-time in the 86th minute, before resuming play and blowing prematurely again on 89 minutes and 47 seconds.

The Tunisian bench, hoping to overturn a 1-0 deficit, were left furious that there was no added time after the half had seen two penalties, two VAR incidents, a red card, five substitutions and a drinks break.

With Mali’s coach awaiting his post-match press duties, AFCON officials barged into the press conference and demanded that the rest of the game be played out.