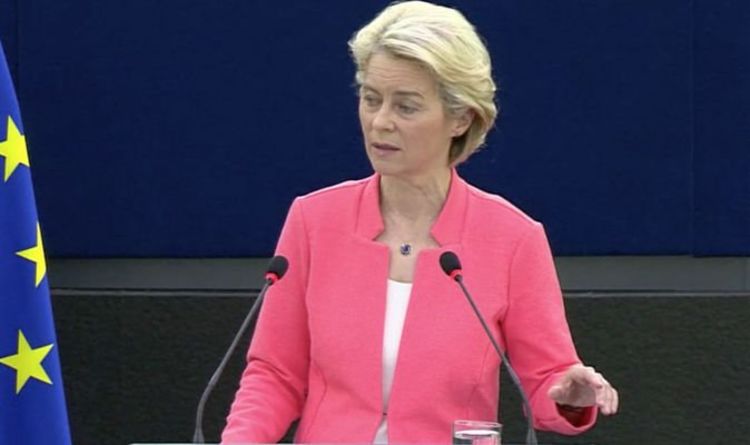 The European Commission President told MEPs that the recent Taliban takeover of Afghanistan proved that the EU needs to bolster its military capabilities. In her annual State of the Union speech, Mrs von der Leyen said this could include the creation of battlegroups and expeditionary forces managed by Brussels-led generals. The top eurocrat told MEPs: “There will be missions where Nato or the united Nations will not be present, but where you should be on the ground.”

She added: “The good news is that over the past year we have started to develop a European defence ecosystem, but what we need now is the European Defence Union.

“There have been many discussions on expeditionary forces on what type and how many battle groups and entry forces we need.

“This is no doubt, part of the debate.”

The EU’s previous efforts to deploy battle groups have failed because of lack of support from EU member states.

Mrs von der Leyen said this attitude needs to change in the future to bolster the bloc’s military capabilities.

“The fundamental issue is why this has not worked in the past,” she said.

“You can have the most advance forces in the world, but if you’re never prepared to use them… of what use are they?

“What has held us back until now is not just a shortfall of capacity… it is the lack of political will.

“If we develop this political will, there is a lot we can do at the EU-level.”

Mrs von der Leyen announced she would work with French President Emmanuel Macron to arrange a summit on the subject of European defence.