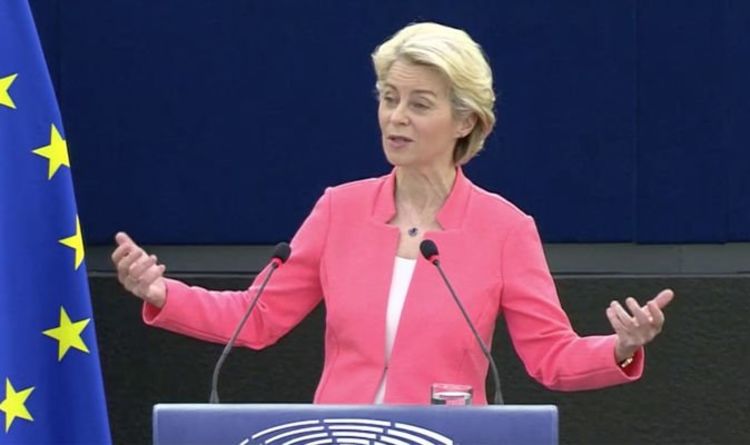 The European Commission President unveiled plans for a “European Health Union” to help prevent future global pandemics after the Covid crisis brought the Continent to its knees. In her annual State of the Union speech in Strasbourg, she said: “Last year I said it was time to build a European Health Union. “Today, we are delivering on our proposals to get the authorities up and running.

“This will be a huge asset to deal with future health threats, earlier and better.”

Mrs von der Leyen said this would be bolstered by a £43 billion cash injection from European taxpayers to help deliver a “a new health preparedness and reliance mechanism”.

She claimed it will “make sure that no virus will ever turn from a local epidemic, again, into a global pandemic.”

It came after she boasted that the EU has vaccinated more than 70 percent of its adult population against coronavirus.

Despite its sluggish start up, she insisted the Brussels-led vaccine programme was a great victory for the bloc.

“Against all critics, Europe is among the world leaders, more than 70 percent of our adult population is fully vaccinated,” she told MEPs.

“We were the only ones to share half of our vaccine production with the rest of the world.

“We delivered more than 700 million doses of vaccines to the Europeans.

“Indeed we delivered also more than 700 million to the rest of the world, to more than 130 countries.”