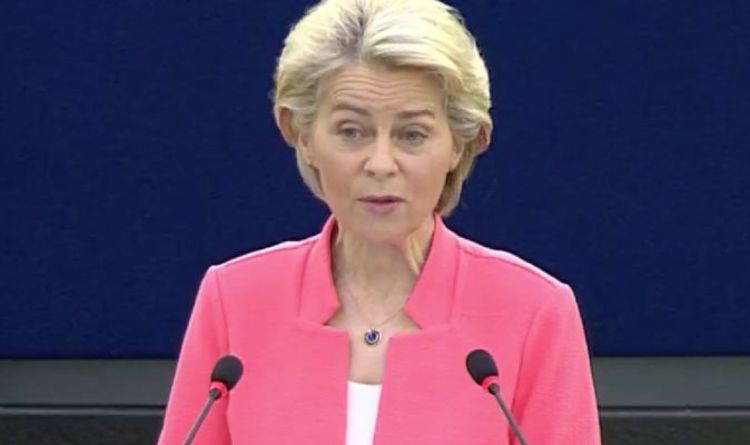 Speaking in the European Parliament for her State of the Union address, the EU Commission leader said the bloc needs to coordinate at European level to create a “state of art European chip ecosystem”. In an attempt to rebuke concerns already simmering across the bloc about the EU’s capacities to reach “tech sovereignty” against China, Mrs Von der Leyen gloated about Galileo satellite systems, failing however to mention Brexit Britain’s contribution to the past project.

She said: “This is not just a matter of competitiveness, this is a matter of tech sovereignty.

“Let’s put all our forces to improve the situation.

“We will present a new European Chips Act. We need to link together our world-class research, design and testing capacities.

“We need to coordinate the European level and the national investment along the value chain.

“And the aim is to jointly create a state of the art European chip ecosystem including production that ensures our security of supply and will develop new markets for groundbreaking European tech.

“Yes, I know this is a daunting task without any questions.

“A big goal that I put out there. And I know there are some who claim it cannot be done.

“But they have said the same 20 years ago about Galileo, and now look where we are. We got our act together.

“So we did it once, we are world leaders in Galileo now. Let’s be bold again and let’s focus all our forces on the semiconductors and let’s be a world leader again.

“This should be our aim.”

The test was carried out in Toulouse, France, and achieved impressive downlink speeds of 200 megabits per second (Mbps).

According to Valery Gineste, Senior Director of Technology at OneWeb, the company has been making leaps and bounds towards launching a global satellite service.

And with nearly 300 OneWeb satellites already in orbit, the company is expected to launch a partial service before the year is over.

The UK Government is a key partner in the venture after bailing out OneWeb from the grips of bankruptcy last year together with Indian firm Indian Bharti Global.

In total, the Government bankrolled a £400million ($500million) stake in the satellite firm in a bid to compete with the EU’s Galileo.

To date, OneWeb has launched 288 out of 648 satellites that will build the OneWeb constellation.

The company has also completed its Five to 50 mission earlier this summer, expanding the constellation’s coverage to Canada, Alaska and the UK.

Earlier this year top officials at the European Commission said the EU is open to renegotiate the UK’s access to Galileo.

According to Timo Pesonen, head of the Directorate-General for Defence Industry and Space of the European Commission, the decision to sit down for talks rests firmly with Westminster.

Speaking at a briefing in Brussels, he said: “The ball is in London, not here.”