President Isaac Herzog and his wife Michal visited the Arab city of Taibe on Sunday, meeting its mayor and urging action against the wave of violent crime plaguing Israel’s Arab community.

Mayor Shuaa Masarwa Mansour and members of the municipal council held a short meeting with the president, before he toured other areas of the city.

Visiting a local high school, Herzog said: “It is unacceptable for us as a society to remain silent in the face of violence, escalation, and loss of personal safety suffered on a daily basis by some citizens.

“We must not get used to this. We must not remain silent,” he added, speaking to a group of 10th graders.

Arab Israelis have long lamented a dearth of law and order in their cities and towns, where they say police rarely care to solve homicides. But this year is poised to be the bloodiest on record, with 104 killings in the community recorded well before year’s end.

On Sunday, the government advanced a NIS 2.4 billion ($784 million) five-year plan to end the violence; some more extreme measures, such as involving the Shin Bet security service and expanding police powers, are also being examined. The plan will now head to the Knesset, where it is set to be passed as part of the upcoming budget. 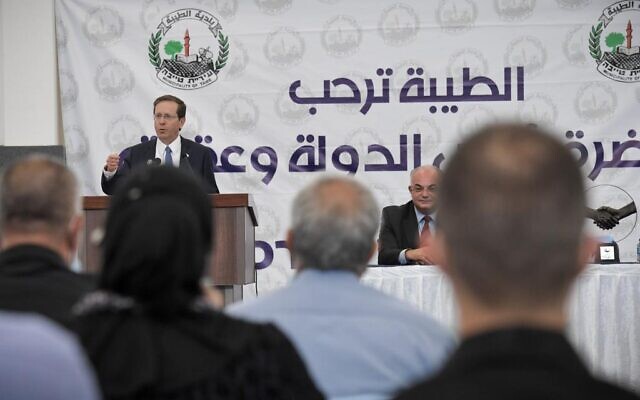 “I am glad that the government of Israel last week passed an important resolution for a five-year plan for Arab society, to reduce inequality,” Herzog said after inaugurating a new sports hall built in the Arab city.

On Friday, Herzog attended an annual memorial for a 1956 massacre of Arab citizens of Israel by border police officers in Kafr Qasim, and apologized on behalf of the state for the killings.

“His visit to the city of Taibe two days after visiting Kafr Qasim is a message of virtue,” Masarwa Mansour said Sunday.

Herzog “keeps surprising us with his morality, and, above all, he is the president of all of us, who believes in coexistence and the shrinking of inequality for the benefit of minorities,” added the mayor.