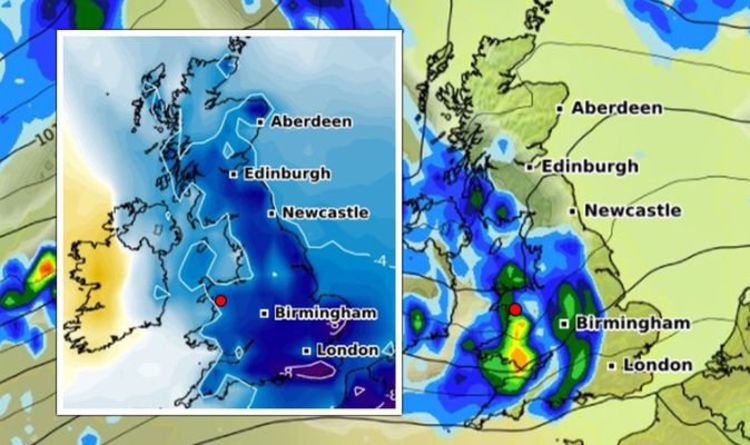 Not only will the UK suffer heavy and long spells of rain but temperatures could be as low as -10C (14F) than what is expected for the time of year. While Britons have been hit by a brief spell of summer sunshine, graphs now show that parts of the south coast could see the mercury fall by -12C (10f) below the average. In combination with a blast of cold Atlantic air mixing with Arctic gusts, Britons will also be hit by a torrential front of rain on October 1.

According to graphs from WX Charts, Britons could suffer rainfall approaching 5mm to start the month.

This heavy rain will be centred on Wales, the Southwest and parts of the Midlands and north of England in the early part of the day on October 1.

As the day progresses, however, the Southeast and London will also be drenched by the heavy band of wet weather.

Commenting on the period between September 25 and October 4, the Met Office also warned of heavy rainfall.

Due to the heavy band of wet weather, the forecaster warned of “coastal gales” for some parts of the country.

They said: “Generally unsettled conditions are set to continue across the UK, with showers and longer spells of rain, heavy at times, interspersed with drier, sunnier interludes.

“Into October, a very general north to south split in weather is likely to form.

“The north is expected to see the most unsettled conditions, outbreaks of rain, possibly heavy at times, and strong winds, possibly coastal gales.”

For the most part, the average across the country is expected to hit 5C (41F) at 12pm on October 1.

According to forecasts for this week, the BBC reports high chances of warmer temperatures.

They added, however, wet weather could be expected by the end of the week ending September 27.

They said: “The start of the week should see some drier and sunnier skies for a time.

“High pressure will be shifting south across northern Europe and weakening, and by midweek a cold front will begin to push in from the northwest.

“This first front is likely to bring some rain to the northern half of the country, but by the end of the week and weekend, wet weather is expected widely.