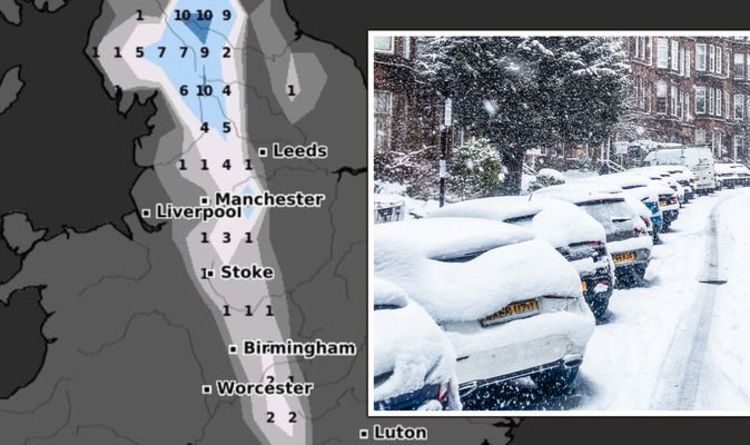 Charts show that snow will reach 11cm below Inverness in Scotland and over the Pennines. It follows a battering by Storm Arwen, which saw violent gusts of 100mph.

Next weekend, snow could reach three times that of tonight in parts of the country, with 30cm coverage in parts of Scotland, according to WX Charts.

Brian Gaze, of the Weather Outlook, said temperatures across the UK will be “very cold”.

Temperatures are expected to reach as low as 0C across parts of the country on Sunday night, feeling as cold as -5c in Birmingham.

He added: “Tonight the wet weather in central counties steadily moves away southwards. It could bring further sleet and snow for a time.

“Once it moves away clear periods develop widely and a sharp frost develops.”

The Met Office has placed a yellow ice warning across vast swathes of the UK from 3pm on Sunday until Sunday morning, as a “widespread” frost is expected to develop.

Meanwhile, Nick Finnis of NetWeather said that snow may settle “in places – even at lower levels.”

A band of rain sleet and snow will continue south across England and Wales through the day, he predicted.

More than 100,000 homes were left without power across the UK.

Since the storm hit Britain, Scotland has seen 75,000 homes without power.

Meanwhile, I’m A Celeb contestants were evacuated last night as the show was forced off air for the first time after Storm Arwen sent a 100ft tree crashing into a wall of Gwrych Castle.

ITV announced in a statement: “Owing to technical difficulties caused by extreme weather conditions in the area, there will be no new episodes of I’m a Celebrity…Get Me Out Of Here! this weekend (Saturday and Sunday).”

A yellow ice warning for tonight and tomorrow morning covers from Portsmouth up through Birmingham and Newcastle to Edinburgh.