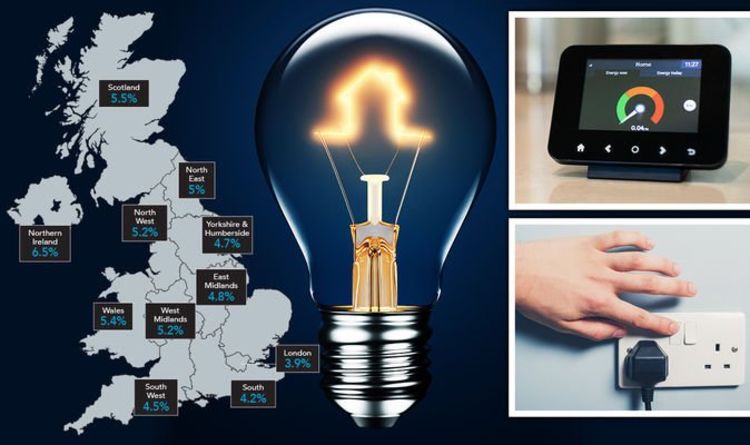 It has been revealed that residents from Northern Ireland spend the biggest proportion of their household budget on gas and electricity out of any other region in the UK. People in Northern Ireland spend 32 percent more on gas and electricity than the average UK household, making them the worst affected region by the huge 250 percent rise in energy prices.

Northern Ireland residents also spend 66 percent more of their weekly budget on electricity than people who live in London, the region that was the least hit by rising energy costs.

Households in Northern Ireland also spend 40 percent more of their weekly budget on electricity than they do on net rent.

The study by heating experts at Boiler Central, used ONS data on household gas and electricity spending between 2018 and 2020, to discover which UK area would be worst affected by the recent surging in energy costs.

Wales was also one of the most areas most affected by skyrocketing prices.

Welsh residents spend more on electricity per month than they do on rent, with ten percent more of their weekly household budget going towards heat and electricity than the average UK household, making them the area third most impacted by boosted costs from energy suppliers.

The West Midlands, the North West and the North East were also badly hit by the increase in electricity costs.

When we look at the data, it’s clear that some areas of the UK are already spending disproportionately more on electricity than other regions, and will likely be most impacted by the hike in energy prices.

“While the government is looking into alternatives to fossil fuels – such as hydrogen and heat pumps – it could be several years until these become viable for every household, and in the meantime, families have to deal with ever more unaffordable gas prices”.

Britain’s energy crisis began to emerge as a result of a mixture of geopolitical and physical factors.

While economies started to recover from pandemic, countries across the northern hemisphere, which suffered from a long and cold winter in 2020-21 that depleted gas storage levels, countries have been scrambling to boost supplies.

This was not helped by Vladimir Putin’s decision to reduce gas supplies travelling from Russia into Europe, again causing supplies to drop and energy prices to surge.

The soaring prices forced many large energy suppliers to go bust and has prompted fears of a crisis, particularly if the winter is cold, which would require an increased demand for heating.