DUBAI, United Arab Emirates — The UAE on Sunday called on its citizens in Lebanon to immediately return home, a day after recalling its diplomats from Beirut over a Lebanese minister’s remarks on the Yemen war.

“In light of current events… the foreign ministry calls on all its citizens in Lebanon to return to the UAE as soon as possible,” it said in a statement.

“The ministry has taken all necessary measures to facilitate the return of its citizens,” it added.

In an interview recorded in August and aired this week, Lebanese Information Minister George Kordahi said Iran-backed Houthi rebels in Yemen were “defending themselves… against an external aggression,” sparking a diplomatic row between Beirut and Arab Gulf states.

A Saudi-led military coalition that has included the UAE intervened to prop up the Yemeni government in 2015, after Houthi rebels seized the capital Sanaa in 2014.

Saudi Arabia on Friday gave Lebanon’s ambassador 48 hours to leave the country, recalled its envoy from Beirut, and suspended all imports from Lebanon. 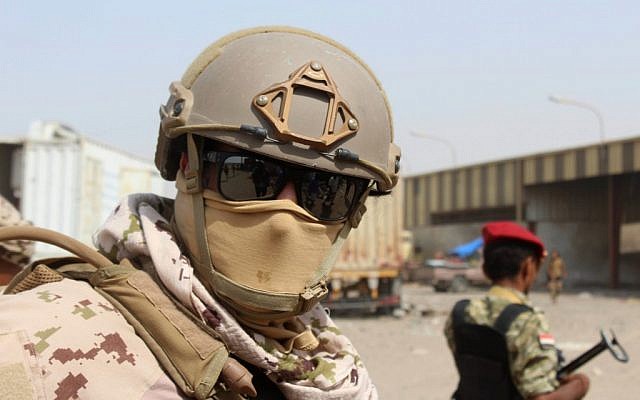 Soldiers with a military coalition in Yemen backed by Saudi Arabia and the United Arab Emirates stand guard at a facility of Yemen’s Red Sea mills company in the port city of Hodeida, January 22, 2019. (Saleh Al-OBEIDI/AFP)

Bahrain and Kuwait quickly followed suit with similar measures, and the UAE on Saturday recalled its diplomats from Beirut in “solidarity” with Riyadh.

The Saudi foreign ministry said its moves were taken after the “insulting” remarks on the Yemen war, but also due to the influence of Lebanon’s Iran-backed Shiite movement Hezbollah.

The UAE’s statement on Sunday came shortly after Kordahi said that resigning was “out of the question.”

The diplomatic crisis is a fresh blow to Lebanon, a country in financial and political turmoil, where a fragile government is struggling to secure international aid, including from wealthy Arab countries.