RAMALLAH, West Bank — The long-anticipated opening hearing in the trial of Palestinian Authority security officials implicated in the death of a prominent critic was postponed at the last minute on Tuesday morning after the defense attorney failed to show.

The hearing was slated to be a preliminary one, albeit dramatic with the charge sheet against the 14 security officers who allegedly beat opposition activist Nizar Banat to death slated to be read aloud.

Banat’s death during a raid of his Hebron hideout caused widespread outrage and saw rare protests against the PA, which were forcefully suppressed by its security forces. The crackdown also sparked debate over what rights groups pan as Ramallah’s tightening restrictions against civil society and free expression.

On Tuesday morning, a wall of rifle-bearing PA officers stood in front of the courtroom entrance, blocking the public from seeing the faces of the accused as they entered the hall.

Despite — or perhaps because of — the intense public interest in the trial, a small courtroom was chosen that could only fit around 35 observers. Less than a dozen journalists and diplomats were allowed to join them, as dozens of their colleagues were forced to wait outside.

But just a few minutes into the hearing, the trial was adjourned and delayed for another week when it became clear that the lawyer for the accused Palestinian officers, Faris Sharab, was not going to make it. 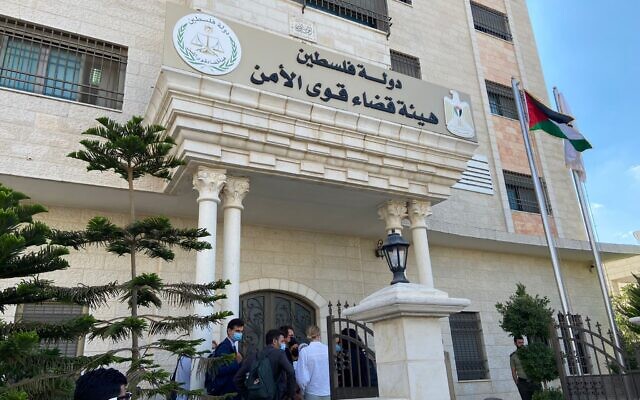 Lawyers prepare for a hearing in the trial of 14 Palestinian security officers accused of beating anti-Palestinian Authority activist Nizar Banat to death on Tuesday, September 14, 2021 (Aaron Boxerman/The Times of Israel)

Ghandi Rubi, a lawyer representing the Banat family, said the defense’s absence “does not bode well” for the future of the case.

“[Sharab] did not send a memo explaining the reasons for his absence. This is a sensitive case, which has aroused public sentiment. He ought to have at the least sent some explanation,” a visibly surprised Rubi told reporters following the aborted hearing.

“For us to start this way — this is an enormous problem,” Rubi said.

Sharab, later told The Times of Israel that he had informed the court of his wish to delay the hearing as he had prior engagements. And then, just a day before the trial, he tested positive for the coronavirus.

“I will be present for the accused at the next session once the quarantine period is completed, according to current protocols,” Sharab said. 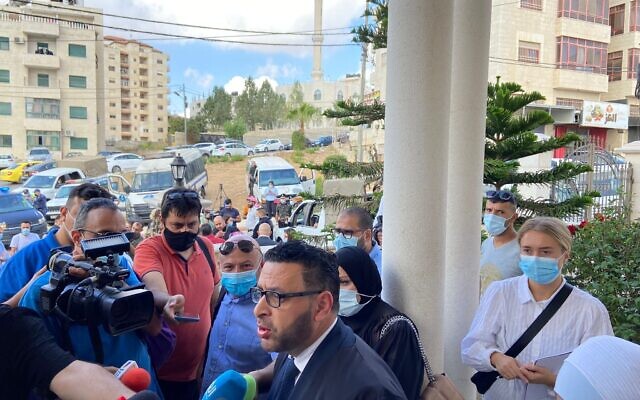 Ghandi Rubi, a lawyer for the family of Nizar Banat, speaks to reporters outside a Ramallah military courthouse on Tuesday, September 14, 2021 (Aaron Boxerman/The Times of Israel)

Sharab forwarded ToI a screenshot from the PA Ministry of Health website that appeared to show that he had, in fact, tested positive for coronavirus on Monday.

Banat, originally from Dura, near Hebron, was a social media activist known for his acerbic videos slamming the Palestinian Authority. He also used his popular Facebook to criticize Israel, gay rights, and other Palestinian politicians, such as exiled Fatah official Mohammad Dahlan.

Following Banat’s death, European diplomats met with PA intelligence chief Majed Faraj, who sought to reassure them that it was merely a one-off event and vowed to bring the perpetrators to justice, according to diplomats who attended the meeting.

In public statements following the incident, PA Prime Minister Mohammad Shtayyeh pledged that a commission of inquiry would prosecute those responsible to the fullest extent of the law.

“The investigative committee that was formed will carry out its work with full transparency in order to clarify the truth, and put matters in right within the framework of Palestinian law,” Shtayyeh said.

The commission eventually comprised of Justice Minister Mohammad Shalaldeh and a representative from the security forces. The Banat family and an independent human rights group were initially part of the panel but later withdrew. 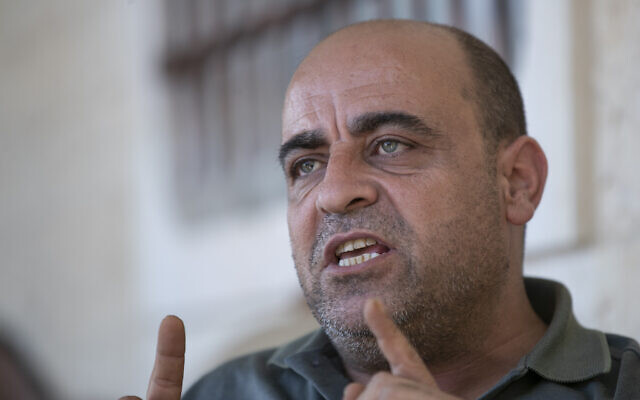 Nizar Banat, an outspoken critic of the Palestinian Authority, speaks to journalists at the family house, in the West Bank city of Hebron, May 4, 2021. (AP/Nasser Nasser)

In the end, 14 Palestinian officers who were allegedly part of the home raid that resulted in Banat’s death were indicted. None of Ramallah’s political leadership or senior PA intelligence officials were charged, however.

Banat’s family has said that indicting only those who allegedly beat him to death misses the point. They have expressed little hope that the military tribunal will bring results, with some family members calling it “a farce.”

“Those accused officers were merely executing orders. Someone had to tell them to carry them out,” a source close to the Banat family said in a phone call Tuesday evening.

“As for next week? I’m sure we can expect more surprises. Perhaps we’ll find that the judge has coronavirus as well,” the source said sarcastically.

The PA has been suffering a growing crisis of legitimacy in recent months. In April, PA President Mahmoud Abbas indefinitely cancelled the first Palestinian national elections in over a decade a half, blaming Israel.

A few weeks later, Ramallah found itself sidelined during the May war between Israel and Hamas; the terror group has since seen rising approval ratings in the West Bank and in Gaza.