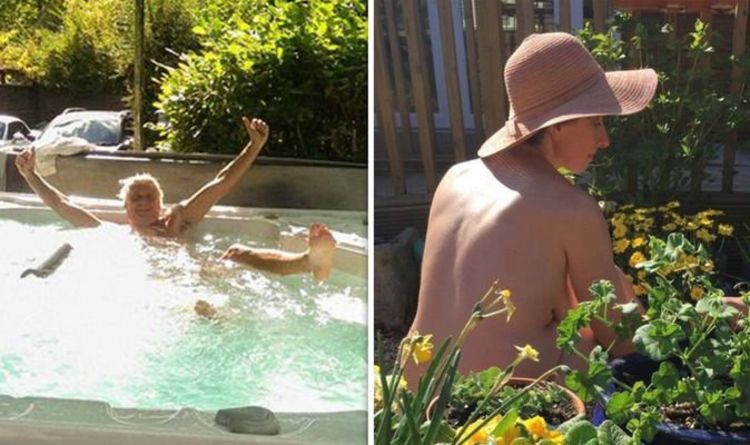 People at Spielplatz Naturist Club near Bricket Wood, Hertfordshire, live without clothes and say it is “amazing” because it allows them to “see [others] as they are”. Spielplatz has now become the UK’s longest running naturist resort, where visitors can stay in tents for as little as £25 per night. Annual memberships cost around £175.

Guests can take a dip in the pool, visit the bar, play tennis or attend a party here – but all in the complete nude.

When a reporter at our sister site Hertfordshire Live attended recently, she was greeted at the gated community by a naked Tom Dyrer-Beers, who lives at Spielplatz wth wife Victoria.

“Society never prepares you for the moment when a man answers the door in the nude,” reporter Isabella McRae writes.

“Nudity is completely accepted as the norm [there].

“Tom estimates that there are around 50 people who live there, all of whom are happier without clothes than with. Wrapped up in my knitted dress and huge fluffy coat, I am the outsider intruding on their world, not the other way around, although they never make me feel that way.”

But Isabella found the community embraces the nudity and believes it helps them get to know each other.

Tom, who is a member of the Board of Directors at Spielplatz, said: “If we wore badges saying we were naturists or nudists on our shoulders, we’d have to answer silly questions and be the brunt of intolerance a lot. So we tend to stay rather quiet. But among other naturists, it’s fantastic, because we just relate to each other without any problems.

“If that were to become more normal, then so many of the concerns would melt away. But it’s a long haul for that to become more normal because you’re overcoming decades’ worth of unnecessary concern. If you get used to seeing people as they are, it’s a whole different story.”

Spielplatz is the German word for “playground”, and it was established by naturists in 1929 as a place of retreat.

Tom, who is from Pennsylvania, US, continued: “There’s so much history here that’s under-appreciated. It used to be that parliamentarians from the 30s, 40s and 50s came up here regularly as a way to escape the press and just relax and enjoy themselves.

“George Bernard Shaw was a visitor and wrote about his experiences here. All kinds of things have taken place that have been slowly lost over the decades. Back in the 50s, there would be several hundreds of people here camping and experiencing [naturism] on a warm summer day.

“If there was a message that Spielplatz helps to embody (no pun intended), it would be that there’s a lot of respect that can be learned from sharing social nudity.”

The site is even open to families, as there is a children’s playground.

There is a large swimmig pool and clubhouse here.

Tom, who piqued Victoria’s interest in naturism, has modelling for life drawing classes and said he’s always found it relaxing.

But Victoria, an artist who attended one of the drawing classes, said: “Tom is so passionate about it. I think it took me a bit longer because society doesn’t see it as a normal thing. As a woman, society makes you so body aware. When you become a naturist, you realise that’s all irrelevant. It’s amazing.

“You realise that bodies go through different stages. This idea of the ‘body beautiful’ is ridiculous. It makes a mockery of it. I just wish that other people could see that. Lots of people don’t have the right idea about places like this. I just don’t understand it.

“When you see people with no clothes on, it’s like: ‘Oh, that’s that.’ You have to concentrate on who they are as a person, and that is what becomes the most important thing. There’s no clothes to say where you are in society, or what group you belong to. It’s just you as a person.”

There are several similar communities in Europe but this is the UK’s only residential naturist camp.

In 1957, the documentary series Out of Step on ITV, investigative reporter Dan Farson visited Spielplatz and interviewed founders Charles and Dorothy Macaskie and their daughter Iseult.

It is believed the programme was the first showing of a naked woman on British television.