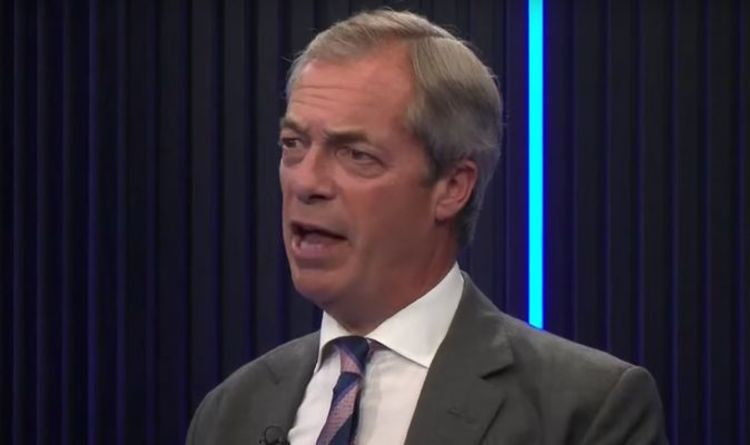 Mr Farage launched a scathing tirade following comments from French Presidential candidate last week where he called on France to abandon both the European Court of Justice and the European Court of Human Rights in a bid to reclaim its “sovereignty”. Mr Barnier also called for a referendum on the issue of French immigration by “September 2022”. But a furious Nigel Farage branded the move as the “biggest act of hypocrisy” he has ever seen from a western politician as he set about a takedown of his former nemesis.

He also refreshed calls for a referendum to impose a five-year moratorium on immigration to France from outside the EU.

He added: “We will propose a referendum in September 2022 on the question of immigration.”

But the comments sparked fury from Mr Farage who shared his anger of the years of “lecturing” he endured from Mr Barnier over Brexit and during his time in the European Parliament.

JUST IN ‘What goes around comes around!’ UK cancellation of French vaccine contract ‘fair’

Mr Farage claimed Mr Barnier saw him as “small minded, backward” and how he “didn’t understand” the Bloc as he recounted conversations with the EU’s chief Brexit negotiator.

But the perplexed Brexiteer slammed how the Fench presidential candidate now talks about “national sovereignty, EU courts not prevailing in France and a referendum on immigration!”

He added how Mr Barnier’s U-turn “is the biggest act of hypocrisy I have seen in modern western politics”.

And in devastating blow Mr Farage slammed: “The man is a complete disgrace!”

On Monday the former EU Commissioner gloated about the success of Brexit, claiming the UK’s withdrawal “saved the single market”.

He said: “The Brexit negotiation was a real battle. It was respectful, carried out collectively with the support of the 27 States of the Union and of the European Parliament, in transparency vis-à-vis governments and citizens, but it was a battle.”

But Mr Barnier is hoping to make a strong showing in the first round of the contest, which is scheduled for April 2022.