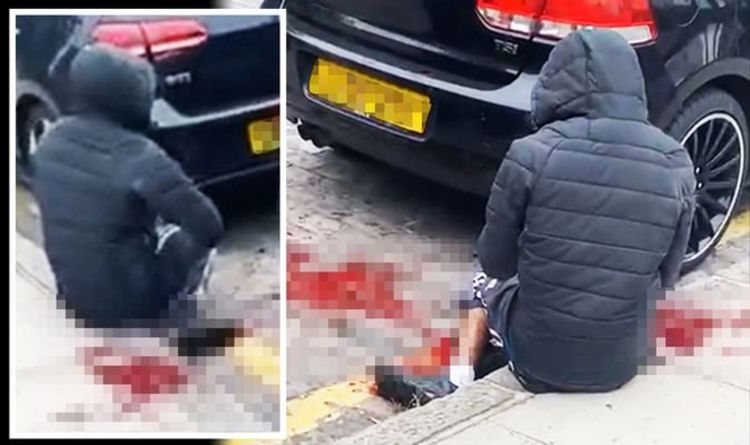 The 19-year-old was allegedly targeted by a rival gang in the Tower Hamlets area of East London. A graphic video showed the dazed man sitting on a blood-spattered pavement.

It then zooms in on his hand – which is barely connected to his arm.

The Met Police later confirmed that the man suffered a “likely life-changing” injury in the attack which happened at around 5.45pm on Sunday afternoon.

A second man – aged 20 – was also found nearby with knife wounds, the force confirmed.

Video of the attack was shared on social media.

“It has not been possible to determine where or when the second half of the video was filmed.

“Police were called to Golding Street at 17:43hrs on Sunday, 12 September following reports of a stabbing.

“Officers attended with London Ambulance Service paramedics and found a 19-year-old man with a significant knife wound to the arm.

“A second man, aged 20, was found with a knife wound in nearby Christian Street.

“Both men were taken to hospital – neither man’s condition is life-threatening but the 19-year-old man’s injuries are likely life-changing.

“We are aware of commentary on social media about the circumstances that led to the incident. An investigation is ongoing and we would urge people not to speculate.

“Anyone who witnessed the incident or who has information about what took place should instead call 101 or tweet @MetCC, giving the reference 5643/12SEP.