A building used as a synagogue at a memorial site in the West Bank’s South Hebron Hills was torched in an apparent arson on Saturday, firefighting officials said.

The synagogue, located at Ziv’s Lookout near the West Bank settlement of Ma’ale Hever and the Palestinian village of Birin, was found with its entire contents burnt, including Jewish prayer books and an empty Torah ark.

According to Fire and Rescue services, firefighters found several car tires inside the building, which were apparently lit on fire and hurled inside.

“The findings at the scene indicate arson,” the fire services said in a statement.

The site, dedicated to two security guards — Yehuda Ben Yosef and Yoav Doron — killed in a friendly fire incident in 2003, has seen several incidents of vandalism and arson over the years.

The rolling hills south of the West Bank city of Hebron regularly see high tensions between settlers, Palestinians, and the military. Palestinians regularly clash with settlers who live in the outposts — illegal under Israeli law — that dot the hilltops. 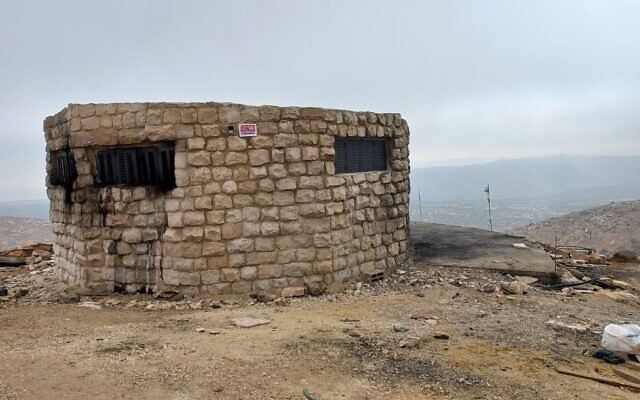 The damaged synagoge building at Ziv’s Lookout, near the West Bank settlement of Ma’ale Hever and the Palestinian village of Birin, on January 15, 2022. (Fire and Rescue Services)

Earlier this month, an Israeli tow truck contractor working for the police was hurt after Palestinians hurled stones at his vehicle in the Masafer Yatta region of the hills.

The Israeli government has declared much of the area to be a military training zone. With the exception of the main town, al-Tuwani, Israeli authorities contend that most of the Palestinian hamlets in the area are therefore illegal.

In late September, dozens of Israelis entered al-Mufaqara, a small hamlet in the South Hebron Hills, hurling stones, smashing windows, and flipping over cars. A three-year-old Palestinian boy was wounded, allegedly when a stone thrown by a settler struck his head.

Aaron Boxerman contributed to this report.