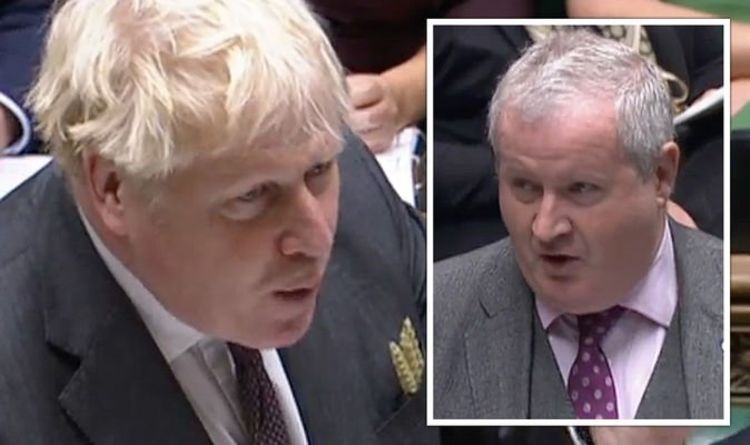 SNP heavyweight Ian Blackford clashed with Boris Johnson during Prime Minister’s Questions after he attacked the incoming cuts in Universal Credit and the effect it will have on low-earners. Mr Blackford called for any Conservative “with a backbone” to stand up to the cuts and stated perhaps instead those who would oppose the cuts have already been promised top jobs amid a rumoured cabinet reshuffle. MPs groaned at Mr Blackford’s “poverty pandemic” quip but Boris Johnson was unfazed, taking to the dispatch box and telling the SNP to stick to campaigning about independence as they would be better off talking about that.

Speaking in the House of Commons, Mr Blackford noted the UK Government’s winter plans for Covid and attempted to make a quip.

The SNP MP noted the cut in Universal Credit would lead to a “poverty pandemic” which made many groan in the Commons.

Mr Blackford said: “If any Scottish Tories are in possession of a backbone now would be a good time to find it.

Mr Johnson listed off several figures including providing £5,000 bursaries for nurses, increasing pay and other measures that would help protect key workers who may be hit by the Universal Credit cut.

He added: “That is only possible because of the investment that we’re making, the package that we’re putting forward for health and social care.

“If he’s really saying that how the Scottish Nationalist Party are opposed to that investment.