RIYADH, Saudi Arabia — The Gulf diplomatic crisis with Lebanon deepened Sunday, with Saudi Arabia saying dealing with Beirut was “pointless,” due to Iran-backed Hezbollah’s dominance, and the UAE pressing its citizens to leave the country.

The developments, sparked by Lebanese Information Minister George Kordahi’s remarks on the Yemen war, have dealt a fresh blow to crisis-hit Lebanon, where a fragile government is struggling to secure international aid, including from wealthy Arab countries.

“There is a crisis in Lebanon with the dominance of Iranian proxies over the scene,” Saudi Prince Faisal bin Farhan told Saudi Arabia’s Al-Arabiya television in an interview on Sunday.

“This is what worries us and makes dealing with Lebanon pointless for the kingdom and for, I think, Gulf countries,” he said.

Kordahi, who was nominated by the Marada Movement — a Christian party allied to Hezbollah — said Yemen’s Houthi rebels were “defending themselves… against an external aggression,” and slammed as “futile” a Saudi-led military intervention in Yemen.

The comments were aired this week, but made in August, before he became a minister. 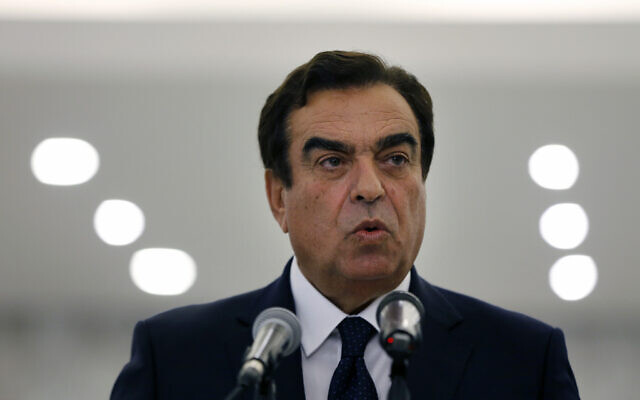 Saudi Arabia has expelled Lebanon’s envoy and recalled its ambassador from Beirut, with Bahrain and Kuwait quickly following suit.

The United Arab Emirates has recalled its diplomats from Lebanon in “solidarity” with the kingdom, and on Sunday, it urged its citizens to leave the country “as soon as possible.”

The foreign ministry said it took the measures after the “insulting” remarks on the Yemen war, but also due to the influence of Lebanon’s Iran-backed Shiite Hezbollah terrorist group.

Prince Faisal said Sunday that the problem in Lebanon was “the continuous dominance of Hezbollah over the political system,” and the Lebanese government’s inability to steer Lebanon “out of this tunnel.”

The issue went “beyond a statement or particular position,“ he said, adding that Hezbollah’s role requires “reform and comprehensive revision.”

The Lebanese information minister said on Sunday that resigning was “out of the question.”

Both Hezbollah and the Marada Movement have rejected calls for his dismissal.

Kordahi has won plaudits in Yemen’s rebel-held Sanaa, with the Houthis on Sunday putting up posters in support of the under-fire Lebanese minister. 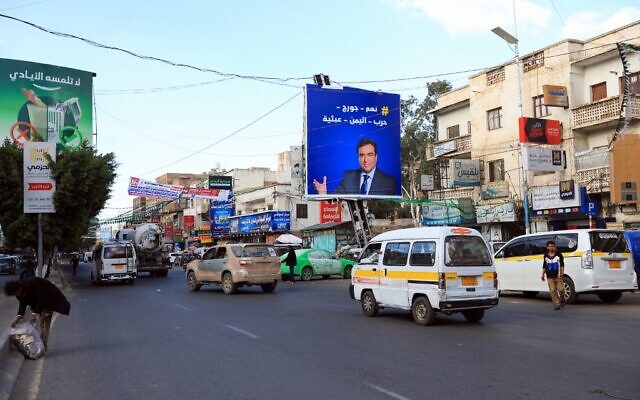 A portrait of Lebanese Information Minister George Kordahi is displayed on a billboard in the Yemeni capital Sanaa on October 31, 2021. (Mohammed HUWAIS / AFP)

“Yes George, the Yemen war is absurd,” said posters bearing his image that were pasted onto billboards and lamp posts.

The Houthis also plan to rename a street in Sanaa after Kordahi, according to shopkeepers and media reports in the city.

The Saudi-led coalition that has included the UAE and Bahrain intervened to prop up the Yemeni government in 2015, after the Houthis seized the capital Sanaa in 2014.

The war has killed tens of thousands of people, and displaced millions.

Rights groups have accused both sides of war crimes.