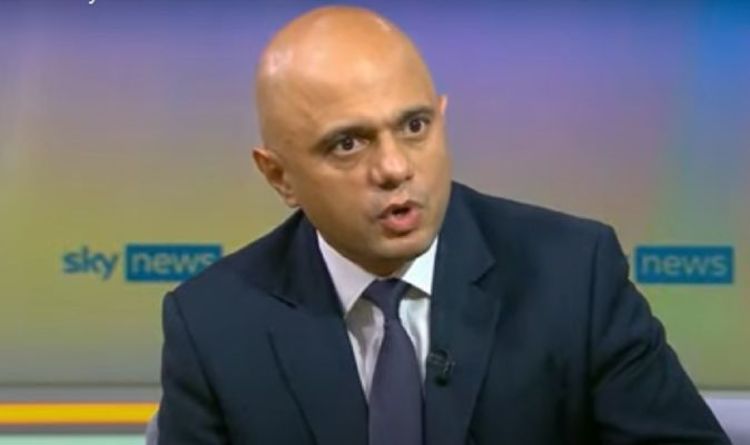 Sky News reporter Niall Paterson lashed out at Health Secretary Sajid Javid over a photo the Government released. In the photo, Cabinet ministers are discussing Boris Johnson’s coronavirus winter plan however, none of the viewable ministers are wearing a mask. Mr Paterson questioned why none of the ministers chose to do so as Boris Johnson would later that day tell the public to wear face masks in crowded indoor situations.

Mr Javid stuttered in his response as he attempted to clarify that Mr Johnson told the public to behave responsibly and wear a mask while in the company of strangers.

Mr Paterson hit back by rhetorically asking whether friends could not pass on coronavirus.

He said: “When you and your Cabinet colleagues met yesterday to discuss and sign off on what the Prime Minister said how many of you were wearing masks?

“You can take a look at the picture that we have got, Number 10 released this picture, there is basically 38 to 40 people in that room, poorly ventilated and not one person is wearing a mask.

“This is on a day that you advise us to wear masks in situations like that.”

Mr Javid argued the Cabinet Ministers were following their own advice at the moment and being responsible based on the current prevalence of coronavirus.

Mr Paterson interrupted and said: “So you would expect the Conservative backbenchers to be wearing masks in PMQs later today?

Mr Javid replied: “No, they are not strangers.”

The Sky News host added: “Can you not catch Covid-19 from your friends?”

Mr Javid continued: “You have to take measures that are appropriate for the prevalence of covid at the time.

“With the measures we have taken, with vaccines, testing, surveillance and sensible use of masks when required, it has been perfectly consistent by the way with what we said when we entered step 4, what we said at the time hasn’t changed.

“It has been consistent throughout and it is important that we set out, as we have in this plan, about how we can work to protect these gains.”

The host closed by arguing more people would likely wear their masks if they saw the Cabinet wearing them around the table.

Mr Javid replied by saying he is aware people are influenced by others but added that people should make the decision on masks based on the advice they have been given and the situation they are in.