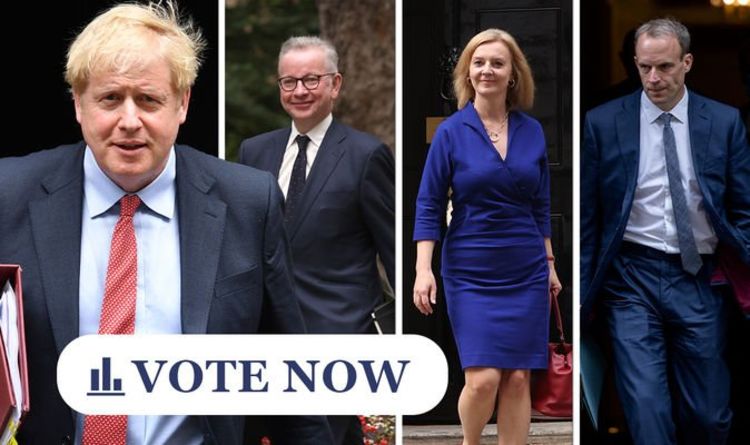 Today, he announced he would conduct a Cabinet reshuffle following Prime Minister’s questions today. With the high-profile sacking of Gavin Williamson and the demotion of Dominic Raab, Express Online is asking in today’s exclusive poll: “Do you support Boris’s new cabinet choices?” As stated, Mr Raab was shifted to the Justice Secretary and Deputy Prime Minister after coming under fire for the crisis in Afghanistan.

In his place, Liz Truss was promoted to Foreign Secretary from Trade and will join the Prime Minister in the US this weekend.

Both Robert Buckland and Mr Williamson were sacked from their respective positions as Justice and Education Secretaries.

Robert Jenrick was also removed from his position as Secretary of State for Housing, Communities and Local Government.

Commentating on the departees, a No10 spokesperson said: “A huge contribution to government as justice secretary and lord chancellor, including making our streets safer through significant reforms to sentencing and tackling re-offending.

“Robert Jenrick has led crucial work over the last two years, most importantly driving reforms to build more houses so homeownership becomes a reality for many more people.

“Gavin Williamson has played a key role in transforming the skills agenda as we create a high wage and high skilled economy, providing a lifetime skills guarantee for millions across the country.”

Commenting on his departure, Mr Buckland said: “I am very sorry to be leaving the Government, as it has been the honour of a lifetime to serve as a minister for over seven years; initially as solicitor general, then minister of state for prisons, and finally as Lord Chancellor and secretary of state for the last two years.”

Michael Gove has been confirmed as the new Housing Secretary in place of Mr Jenrick.

Former Brexit Secretary, Steve Barclay has moved up to take up Mr Gove’s prior position as Chancellor of the Duchy of Lancaster.