Talks on a possible plea deal for former prime minister Benjamin Netanyahu in his criminal trial are progressing, with a potential solution found to the major sticking point left between Netanyahu’s team and state prosecutors, according to a television report Saturday.

According to multiple reports in recent days, Netanyahu has been resisting a deal primarily due to Attorney General Avichai Mandelblit’s demand that he agree to the accord designating his actions as carrying “moral turpitude” — legally barring him from public service for seven years.

According to Channel 13, a compromise may have been found, whereby the sides would agree that the trial judges at the Jerusalem District Court will rule on whether the former Israeli leader’s actions deserve such a designation — with Mandelblit reasoning that it is highly unlikely that judges would not do so if Netanyahu admits to offenses of fraud and breach of trust.

Channel 12 reported Saturday that sources close to Netanyahu are signaling he backs the deal, as do his attorneys. It also said that some of Netanyahu’s family members are not yet on board, though it did not provide further details.

The network noted that the deal now on offer had been discussed on several occasions over the past two years, but that Netanyahu had previously refused to consider proposals that included “moral turpitude.”

Saturday evening saw hundreds of protesters gather near the Petah Tikva home of the attorney general and demonstrate against any prospect of a plea deal with the former premier. The protesters called for Netanyahu’s trial to be allowed to come to its conclusion and for judges to rule on whether he committed punishable offenses.

The protesters include groups that demonstrated for many months in 2020 outside Netanyahu’s Jerusalem residence, calling for him to leave political office over his criminal cases.

On Friday, Channel 12 reported that Mandelblit insists Netanyahu must accept as a basic condition the framework of the deal before talks can move forward: that he will be convicted of fraud and breach of trust; that he will remain an MK until the court determines his punishment and sentences him to 3-6 months in jail that will be commuted to community service; and that he will agree that his actions will be designated as carrying “moral turpitude.”

In recent days, many observers in the political sphere have assessed that a plea deal could doom the current governing coalition, brought together mostly by a distaste for Netanyahu. New leadership in Likud, according to conventional wisdom, would likely lead to the breakup of the government and the formation of a right-wing coalition.

However, unnamed sources in the coalition on Friday told Channel 12 they believed the government would survive a deal, at least in the immediate future — noting that it would likely take months for Likud to sort out its future if Netanyahu departs.

Netanyahu — who has long publicly proclaimed that his innocence would be proven in court, and previously vowed not to accept any plea deal — is reportedly consulting with aides about moving forward with a deal. Reports have indicated that Mandelblit may be eager to wrap things up before his term ends at the end of the month. 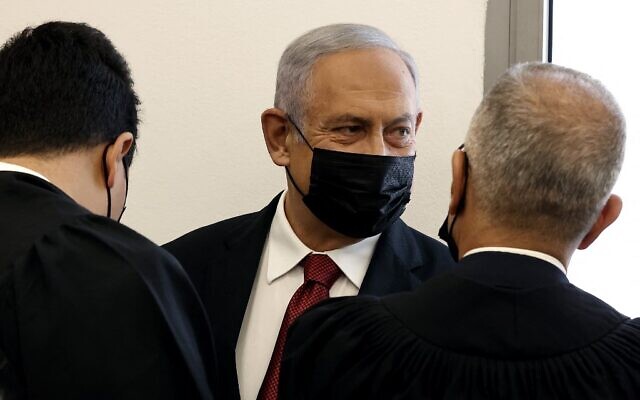 Opposition leader Benjamin Netanyahu (center) arrives for a court hearing in his trial, on November 16, 2021, in Jerusalem. (Jack Guez/AFP)

According to Channel 13, Netanyahu started considering a plea deal after receiving a legal assessment that key state’s witness Nir Hefetz’s recent testimony was effective for the prosecution’s case, and amid concerns that the upcoming testimony of another state’s witness, Shlomo Filber, could also be damaging.

Numerous state prosecution officials were unaware of the negotiations for a plea deal with Netanyahu until Wednesday, with only Amit Aisman, the state attorney, and Liat Ben Ari, the lead prosecutor in the Netanyahu trial, kept in the loop, according to a Channel 13 report Friday.

Netanyahu is on trial in three separate graft cases: fraud and breach of trust in Case 1000 and in Case 2000, and charges of bribery, fraud and breach of trust in Case 4000. He denies all allegations against him, and says the charges were fabricated by a biased police force and state prosecution service, overseen by a weak attorney general, in league with political opponents and the leftist media.