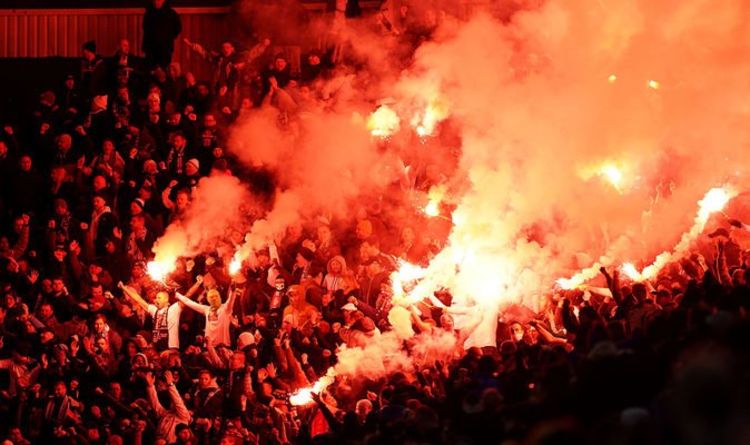 One of the officers suffered a concussion while another other has a fractured wrist. They were some of 12 officers injured in the “appalling” scenes of violence at King Power Stadium in the centre of the city as The Foxes took on Poland’s Legia Warsaw in the Europa League.

The trouble started when flares could be seen in the stands, creating a smokescreen which drifted onto the pitch.

The Police Federation condemned the behaviour, tweeting: “Appalling scenes. Our colleagues should not have to put up with such violence from so-called football fans.”

Eight people have been arrested but police are yet to state if these are home supporters or Legia fans. They remain in custody.

Baton-wielding riot police had to line the length of the stands in between large blue banners, which separated the two fan groups, thought have been released by the away fans.

“Officers were in attendance at the match yesterday evening (24 November) and responded to disorder which broke out within the Legia Warsaw fans section during the second half of the game.

“A number of flares were set off and some fans attempted to breach the segregated line assaulting officers in the process.

“During the disorder, 12 officers were injured. Two officers were treated at hospital, one for concussion while the other sustained a fractured wrist.

“In order to maintain both public and officer safety, Legia Warsaw fans were held back in the stadium at full time and no further disorder was reported.

“A total of eight arrests were made and a large number of ejections were also made from the ground. All those arrested remain in custody at this time.”

The chaos erupted in the second-half with Leicester 3-1 up.

Large banners were unfurled from what looks like the back of the stadium, down towards the front of the stands, over thousands of Legia fans.

One fan who was at the match said: “The visiting fans unfolded a giant banner that suspiciously wasn’t moved for many minutes, there were hundreds of men under cover.

“Suddenly it dropped and 20 to 30 flares were lit and the atmosphere changed as smoke billowed around the stadium. Away fans then began pulling at the sheets that separated them from the home fans.

“Baton wielding police were battling with the sea of fans before riot police arrived. All eyes in the ground were on it – as the result was already beyond doubt.

“Police dealt with it well, but it was unnerving to witness, though it was no fault of LCFC or their fans.”

Assistant Chief Constable Julia Debenham said: “While I am pleased that our officers responded well and managed to contain the away fans within their section and minimise contact between them and the home crowd, it’s extremely disappointing that a number of fans acted the way they did and eleven officers were injured during the incident.

“This type of behaviour is not acceptable and we will be investigating the incident fully in order to bring those offenders to justice.”