Residents of the ultra-Orthodox Jerusalem neighborhood of Mea Shearim clashed with police and city officials who attempted to take down a sukkah perched on scaffolding three stories above the street.

Hundreds of people crowded near the sukkah on Rabbi Zonenfeld Street in the capital Tuesday evening and night, protesting the demolition order, fighting with cops and calling them “Nazis.”

Protesters were accused of throwing stones and eggs at police and municipal workers, injuring one, Walla reported. At least one person was arrested.

The sukkah, a temporary abode that religious Jews move into for the upcoming holiday of Sukkot, belongs to the Rabbi Moshe Bransdorfer, a member of the hardline Eida Charedit ultra-Orthodox leadership council.

Pictures of the wood-paneled hut balanced atop a precarious-looking jumble of scaffolding directly over a busy street elicited shock when shared online.

The city declared the structure a public safety hazard and dispatched police to demolish the structure, though members of the community produced papers purporting to show that the structure had been inspected and approved by an engineer.

City workers initially arrived in the afternoon to begin taking apart the scaffolds, but community members barricaded themselves inside the sukkah, making it unsafe to do so until police could remove them.

Police eventually left the neighborhood without taking down the structure, after community members agreed to take it out down themselves, the Kikar Hashabbat website reported. 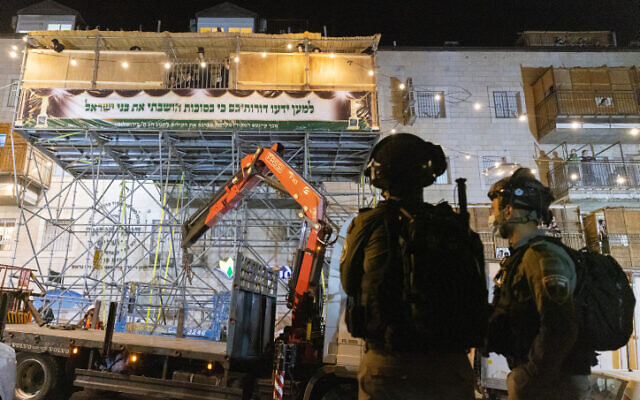 Police outside a precarious-looking sukkah in Jerusalem slated for demolition, on September 12, 2021. (Olivier Fitoussi/Flash90)

Clashes have been sparked in the past over attempts to arrest draft-dodgers or enforce coronavirus regulations there, among other things. But authorities have also been accused of turning a blind eye to avoid riling up the community. 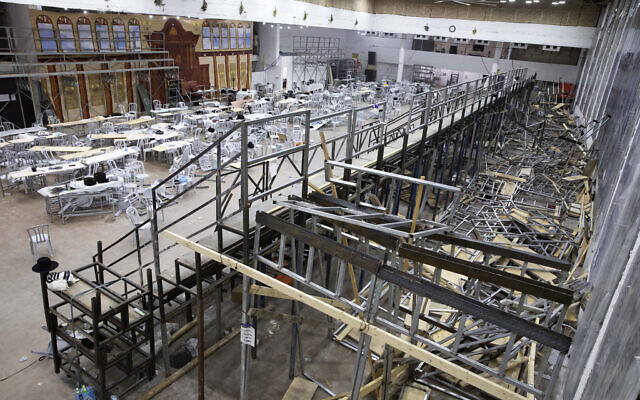 The site where a bleacher crowded with worshipers collapsed in a synagogue in Givat Zeev, near Jerusalem, at the start of the Jewish holiday of Shavuot, on May 16, 2021. (AP Photo/Sebastian Scheiner)

On April 30, 45 people were killed in the worst civilian disaster in the country’s history when a system of ramparts at a mountaintop shrine on Mount Meron failed during a Lag Ba’omer pilgrimage attended by hundreds of thousands, leading to a massive crush.

Weeks later, bleachers at a new Haredi synagogue in the settlement of Givat Ze’ev collapsed, killing two and injuring hundreds. 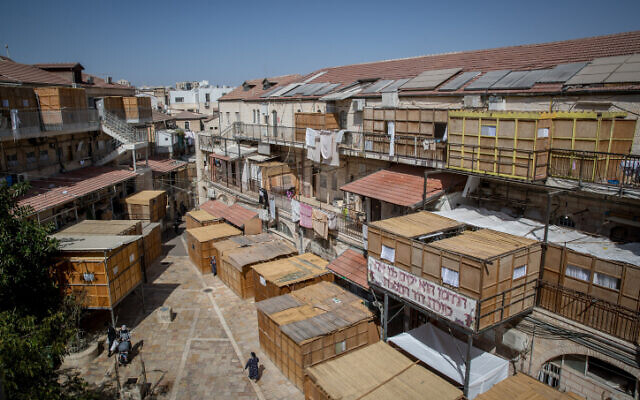 Sukkahs in Mea Shearim in Jerusalem, on October 1, 2020. (Yonatan Sindel/Flash90)

Because a Sukkah traditionally needs an open view of the sky, Mea Shearim’s cramped warren of tiny streets and older buildings are known to become even more crowded over Sukkot, with nearly every available plot taken up by a temporary structure, and forcing some to come up with creative solutions.

The Sukkot holiday begins next week.