The Israel Police announced on Thursday that it had arrested two additional suspects in a stone-throwing assault on a Palestinian village in the Southern West Bank earlier in the week that left more than a dozen wounded.

According to the police, the two suspects are an adult and a minor. On Wednesday, police arrested three Jewish Israelis over their alleged participation in the attack.

On Tuesday afternoon, dozens of masked Israelis threw stones at Palestinians in the South Hebron Hills. The rocks smashed cars and injured at least 12 Palestinians, including the three-year-old, Palestinian and Israeli witnesses said.

Some Palestinians threw stones back at the settlers as well, leading to clashes between the two sides, witnesses said. Three Israelis were injured as well, according to Hebrew media reports.

Foreign Minister Yair Lapid condemned the incident as terrorism and called for justice to be carried out.

“This violent incident is horrific and it is terror,” Lapid tweeted Wednesday evening. “This isn’t the Israeli way and it isn’t the Jewish way. This is a violent and dangerous fringe and we have a responsibility to bring them to justice.” 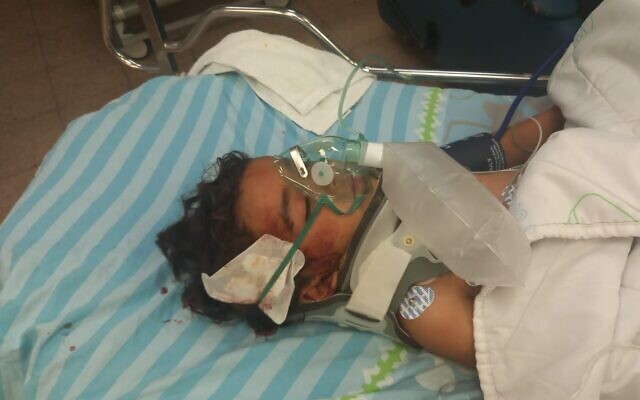 Health Minister and Meretz leader Nitzan Horowitz said Tuesday evening that “the violent rampage of lawbreakers is intolerable and we will stop it.”

In videos from the scene, Israeli settlers can be seen breaking Palestinian car windows and hurling stones at Palestinian homes. The confrontations took place near the small Palestinian shepherding village of al-Mufaqara, a cluster of homes that straddles two illegal Israeli West Bank outposts, Avigayil and Havat Maon.

Both the European Union and the United Nations condemned the violence, which the UN labeled “an attack on Palestinian civilians.”

“Settler attacks on Palestinians must stop. Israel as the occupying power must ensure public order and the wellbeing of the occupied population as well as promptly investigate and prosecute the perpetrators of such attacks,” the EU’s envoy to the Palestinian said in a statement.

Assault and vandalism by settlers against Palestinians and Israeli security forces in the West Bank are commonly referred to as “price tag” attacks. Perpetrators say that they are retaliation for Palestinian violence or government policies seen as hostile to the settler movement. 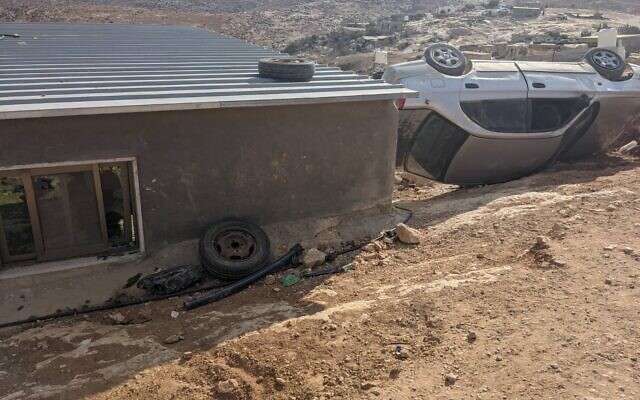 Smashed windows and a flipped-over car, in what Palestinians say was an assault by dozens of masked settlers from a nearby Israeli outpost, on Tuesday, September 28, 2021, near the South Hebron Hills. (Courtesy)

Israeli authorities rarely arrest Jewish perpetrators in such attacks, making Wednesday’s and Thursday’s arrests an unusual step. Rights groups lament, however, that convictions are even more unusual than arrests, and the vast majority of charges in such attacks are dropped.

On Tuesday, a Palestinian and an Israeli settler were arrested by Israel Police officers. According to a police spokesperson, the Palestinian is suspected of attacking a soldier and violating a military order. The Israeli, a Havat Maon resident, is believed to have thrown stones and disobeyed soldiers’ instructions, the spokesperson said.

Palestinian witnesses said that the Israeli military fired tear gas and stun grenades at them, but not the settlers. The army declined to respond to the allegations.

The injured boy, Mohammad Bakr Hussein, was allegedly struck in the head by a rock hurled by an Israeli settler as he slept in his house in al-Mufaqara. Hussein was evacuated to Soroka Medical Center in Beersheba in moderate condition, a hospital spokesperson said.