Prime Minister Naftali Bennett met with top health officials on Thursday after a public rift emerged this week over the government’s COVID-19 approach.

According to a joint statement from the Prime Minister’s Office and Health Ministry, the meeting dealt with “joint work priorities” and “various issues” before a ministerial forum tasked with steering pandemic policy convenes Sunday.

The statement claimed that “there was no disagreement” between the two sides and that Bennett “made it clear to the participants that the close cooperation that has characterized the fight against the coronavirus so far will continue.”

The meeting appeared to mark an end to the feud between Bennett and health officials, who fumed after the premier made their differences public during his trip to the United States this week. 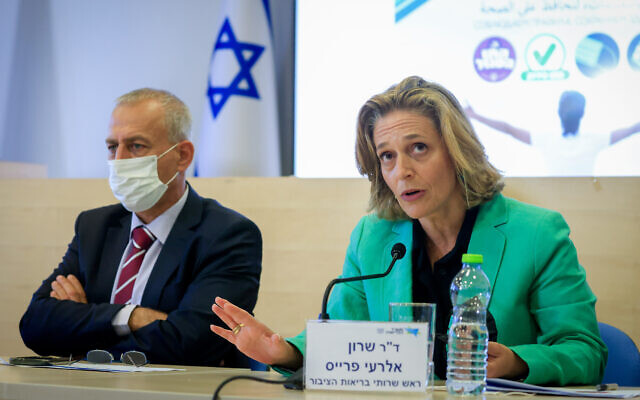 Dr. Sharon Alroy-Preis, head of public health services at the Health Ministry, speaks at a press conference in Jerusalem, on August 29, 2021. On the left is Nachman Ash, director-general of the Health Minsitry. (Olivier Fitoussi/Flash90)

In a briefing with Israeli journalists in New York, Bennett accused the medical experts advising the government of “not seeing the full picture” and stressed that they don’t make the final decisions — the government does.

Horowitz called the comments “unnecessary and unfortunate,” while Ash said that the words were unexpected and “unpleasant.”

The back-and-forth came ahead of Sunday’s meeting of the coronavirus cabinet, the first in a month, with Bennett expected to resist imposing any new coronavirus restrictions despite hundreds of new COVID deaths.

While Israel’s fourth wave of infections has seen record numbers of daily cases, the number of patients needing hospitalization has remained lower than previous bouts, which experts attribute to the country’s high vaccination rates.