THE National Capital Region (NCR) on Saturday has recorded a slowdown in the growth of coronavirus disease 2019 (Covid-19) cases, from 5 percent on Thursday to 3 percent on Friday, according to a senior fellow of the OCTA Research Group.

Dr. Guido David said that based on his calculations of data from the Department of Health (DoH), NCR’s reproduction number has also decreased to 3.22, down from 3.77 on January 10 and nearly half of the 6.12 reported on January 3. 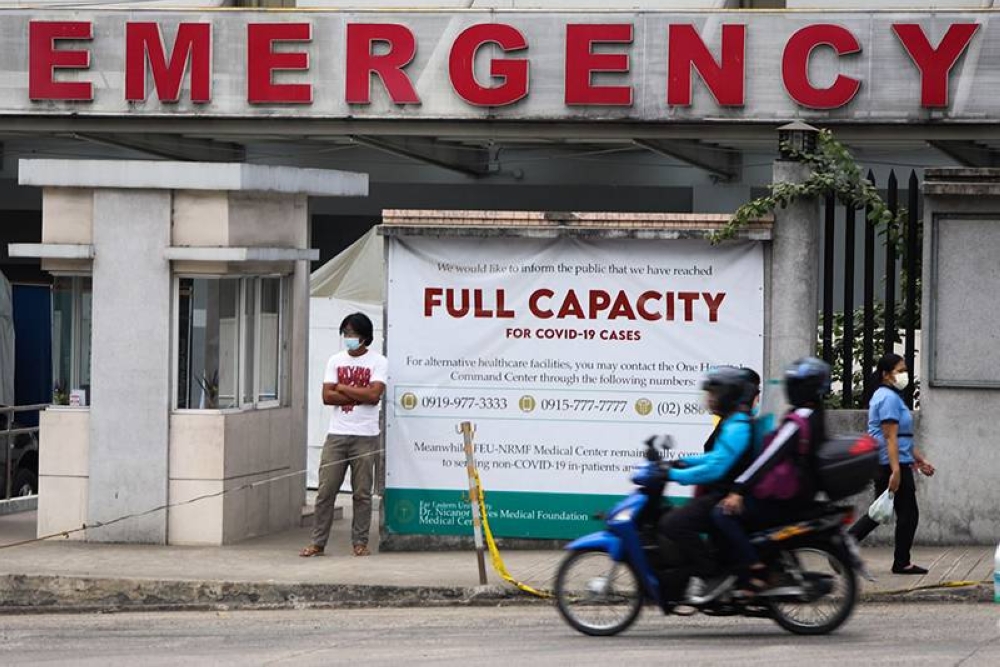 NO MORE ROOM The Far Eastern University-Nicanor Reyes Medical Foundation in Quezon City puts up a sign near its entrance on Saturday, Jan. 15, 2022, advising the public that it can no longer admit Covid-19 patients because it has reached its full capacity. PHOTO BY JOHN ORVEN VERDOTE

He said that the growth rate going negative means the cases in the region would begin to decrease.

But David clarified that the numbers could change depending on data backlogs and late reporting of cases by the DoH.

David’s statement comes as the country logged 39,004 new Covid cases on Saturday, a record in a single day, with NCR posting 18,142.

The DoH believes NCR cases will continue to rise in the next few days due to “sustained” community transmission of the highly contagious Omicron variant.

Vergeire said that based on DoH’s projections, the number of active cases could reach 300,000 in the NCR alone and that the peak, or the highest single-day number of cases would not be seen until the end of January or the middle of February.

“We are seeing community transmission of the Omicron variant here in the NCR and while we are yet to receive the updated results of our genomic sequencing, we have already determined that we have local cases based on the trends that we are seeing — these are the characteristics of Omicron,” Vergeire said.

Vergeire also said that the DoH is planning to deploy its chatbot Kira (Katuwang na Impormasyon para sa Responsableng Aksyon) to allow citizens to send the results of their antigen tests to the agency should they test positive for Covid-19.

The DoH is yet to release the guidelines on the use of self-administered test kits for Covid-19.

The Philippines logged another record high number of new Covid-19 cases in a single day at 39,004 on Saturday, raising the total number of active Covid infections in the country to 280,313.

No need to raise Alert Level 4 in the NCR

Meanwhile, Malacañang backed the decision of the Inter-agency Task Force for the Management of Emerging Infectious Diseases (IATF-EID) not to raise the alert level in the NCR despite the sustained increase of Covid-19 cases in the region possibly fueled by the Omicron variant.

Palace spokesman Karlo Alexei Nograles said that Metro Manila has yet to meet the metric for Alert Level 4, particularly in hospital bed utilization.

The IATF opted to extend Alert Level 3 in the NCR and several other areas until January 31.