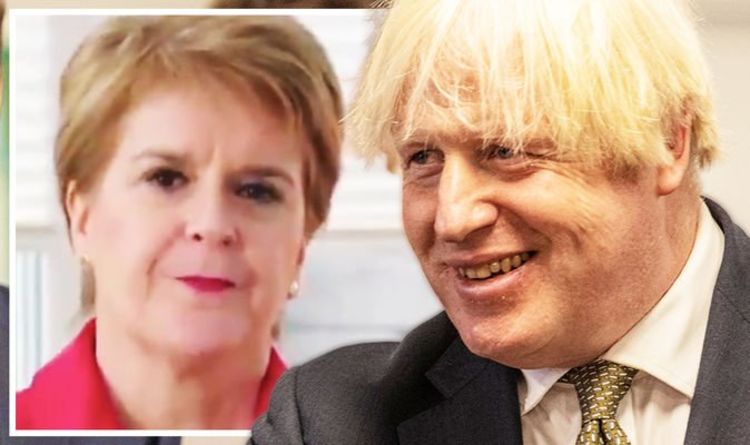 Tory Murdo Fraser has said unfortunately for the First Minister, the decision does not lie with her but with Westminster – adding that there was no appetite for another divisive vote among the Scottish people. Mr Fraser was speaking after Ms Sturgeon outlined her determination to secure a second referendum in seven years during her speech to the SNP’s annual conference yesterday.

He told Express.co.uk: “This is a First Minister who is obsessed with the constitutional question.

“She spent a great deal of her speech talking about another independence referendum when we know that the priority for the great majority of people in Scotland is to focus on Covid recovery.

“I think I saw one opinion poll last week that said that will be 17 percent of people in Scotland want us to have another independence referendum, within the next two years, which is Nicola Sturgeon’s preferred timescale.”

The question of independence was “not a priority” for Scottish people, who were more interested in rebuilding the economy and public services including the NHS and schools, as opposed to what Mr Fraser called “this continual focus on a divisive referendum”.

He added: “In that respect, I think she’s very much out of step out of tune with the Scottish people.”

Mr Fraser stressed: “She is under pressure from her party membership to deliver independence, of course.

He explained: “She’s undoubtedly under pressure in the party to deliver another referendum, but it’s not in her gift.

“The UK government has said that they don’t believe it’s the right time to have another referendum, and they’re more in tune with the public mood in Scotland that Nicola Sturgeon.”

There was also no guarantee the SNP would prevail, with the party having slipped back compared with last year, Mr Fraser, who served as Deputy Leader of the Scottish Conservative Party from 2005 to 2011, claimed.

He said: “The country is very starkly divided – there’s probably a small majority at the moment, for remaining in the UK.

“So there has been a bit of a turnaround over the last year or so.

“There is no momentum on the side of the campaign to breakup the UK – if anything, the figures are going the other way.”

During her online speech yesterday, Ms Sturgeon said she wanted “a legal referendum within this term of Parliament, Covid permitting, by the end of 2023”.

With reference to the coronavirus pandemic, she said: “The crisis is not yet over, but we will get through it.

“And then it will be the time to think not of the past but of Scotland’s future. To decide who should be in charge of that future.”

She insisted: “People in Scotland have the right to make that choice.

“To decide to take our destiny into our own hands and shape a better future. Trust me, the time for that choice is approaching.”