“The negotiators will return to Vienna in two days” but expert-level discussions at the eighth round of talks would continue on Saturday and Sunday, IRNA news agency said.

The talks between Tehran and world powers resumed in late November after they were suspended for around five months as Iran elected a new, ultra-conservative government.

It offered the Islamic Republic sanctions relief in exchange for curbs on its nuclear program.

But former US president Donald Trump unilaterally withdrew from the agreement in 2018 and imposed crippling sanctions, prompting Iran to begin rolling back its commitments.

“We are now at a stage of the negotiations where we are discussing difficult issues and how we can translate the subjects that we agreed upon in principle into words and enter them into a document,” IRNA quoted an anonymous source as saying.

“We are discussing the details,” the source said, adding that “this is one of the most tedious, long and difficult parts of the negotiations, but is absolutely essential for achieving our goal.” 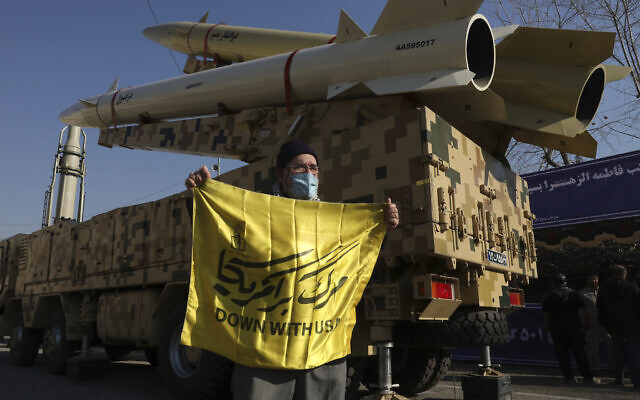 A man holds an anti-US banner in front of Zolfaghar (top), Dezful (bottom), and Qiam (background left), missiles displayed in a missile capabilities exhibition by the paramilitary Revolutionary Guard a day prior to second anniversary of Iran’s missile strike on US bases in Iraq in Tehran, Iran, on January 7, 2022 (AP Photo/Vahid Salemi)

The main aims of the negotiations are to get the US to return to the deal and lift sanctions, and for Iran to resume full compliance with the accord.

Tehran is seeking verification of the sanctions easing, as well as guarantees that Washington will not withdraw from the deal again.

“Regarding the three subjects (lifting of sanctions, nuclear commitments and implementation, sequencing and verification), there are still open issues and some of them are tough,” the source said.

The return of the negotiators to their capitals came as European Union foreign policy chief Josep Borrell said on Friday that a deal with Iran remained “possible,” and that the talks were advancing in a “better atmosphere” than before Christmas.

Iran’s foreign ministry spokesman Saeed Khatibzadeh on Monday said the efforts by “all parties” to revive the nuclear agreement had resulted in “good progress.”

French Foreign Minister Jean-Yves Le Drian recently noted progress in the talks, but said it was “too slow.”

US Secretary of State Antony Blinken said on Thursday that only “a few weeks” were left to save the 2015 deal, and that Washington would consider “other options” if the negotiations fail.