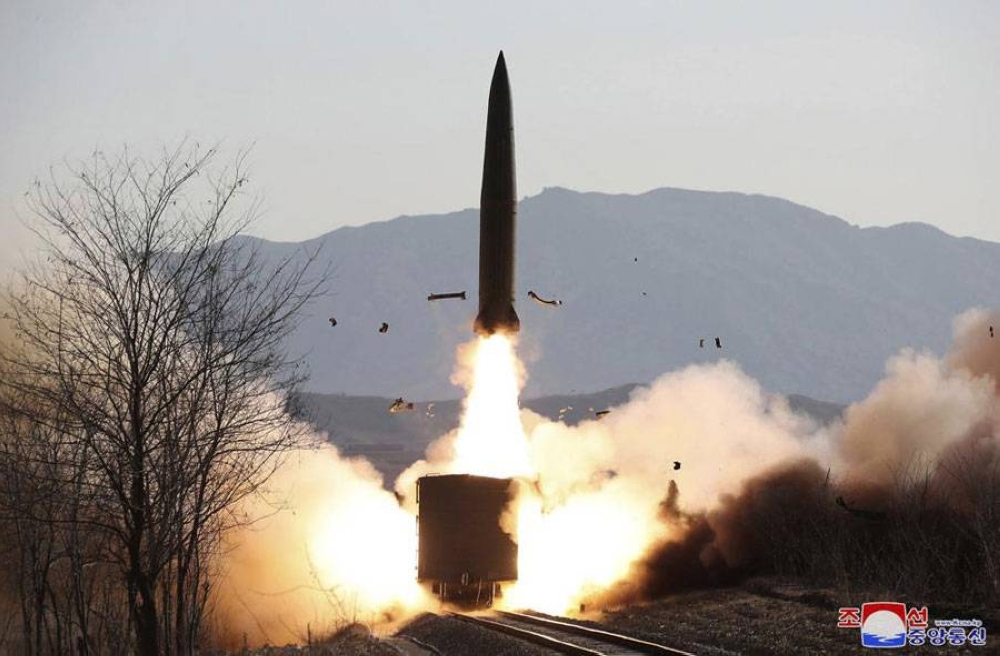 This photo provided on Saturday, Jan. 15, 2022, by the North Korean government shows a missile test from railway in North Pyongan Province, North Korea, on Jan. 14, 2022. North Korea on Jan. 15 said it test-launched ballistic missiles from a train in what was seen as an apparent retaliation against fresh sanctions imposed by the Biden administration. Independent journalists were not given access to cover the event depicted in this image distributed by the North Korean government. The content of this image is as provided and cannot be independently verified. Korean language watermark on image as provided by source reads: “KCNA” which is the abbreviation for Korean Central News Agency. KOREAN CENTRAL NEWS AGENCY/KOREA NEWS SERVICE VIA AP

SEOUL: North Korea on Saturday said it test-launched ballistic missiles from a train in what was seen as an apparent retaliation against fresh sanctions imposed by the Biden administration.

The report by the North state media came a day after South Korea’s military said it detected the North firing two missiles into the sea in its third weapons launch this month.

The launch came hours after Pyongyang’s Foreign Ministry issued a statement berating the United States for imposing new sanctions over the North’s previous tests and warned of stronger and more explicit action if Washington maintains its “confrontational stance.”

North Korea in recent months has been ramping up tests of new missiles designed to overwhelm missile defenses in the region amid pandemic-related border closures and a freeze in nuclear diplomacy with the United States.

The troops swiftly moved to the launch site after receiving the missile-test order on short notice and fired two “tactical guided” missiles that accurately struck a sea target, the report said.The North’s Rodong Sinmun newspaper published photos of what appeared to be two different missiles soaring above from rail cars engulfed in smoke.Cheong Seong-Chang, an analyst at the private Sejong Institute in South Korea, said the North likely staged a launch that hadn’t been previously planned to demonstrate its opposition toward US sanctions.

The missiles fired from rail cars appeared to be a solid-fuel short-range weapon the North has apparently modeled after Russia’s Iskander mobile ballistic system.First tested in 2019, the missile is designed to be maneuverable and fly at low altitudes, which potentially improves their chances of evading and defeating missile systems.

The North first launched these missiles from a train in September last year as part of its efforts to diversify its launch options, which now include various vehicles and may eventually include submarines depending on the country’s progress in its pursuit of such capabilities.

Firing a missile from a train could add mobility, but some experts say North Korea’s simple rail networks running through its relatively small territory would be quickly destroyed by enemies during a crisis.

The Biden administration on Wednesday imposed sanctions on five North Koreans over their roles in obtaining equipment and technology for the North’s missile programs in its response to the North’s previous tests this month.The announcement by the Treasury Department came just hours after North Korea said Kim oversaw a successful test of a hypersonic missile on Tuesday that he claimed would greatly increase the country’s nuclear “war deterrent.”

Tuesday’s test was North Korea’s second demonstration of its purported hypersonic missile in a week.Hours before Friday’s launch, the KCNA carried a statement attributed to an unidentified spokesperson of the North’s Foreign Ministry, who insisted that the new sanctions underscore hostile US intent aimed at “isolating and stifling” the North.

The spokesperson warned of a stronger reaction if Washington continues its “confrontational stance.”Hypersonic weapons, which fly at speeds in excess of Mach 5, or five times the speed of sound, could pose a crucial challenge to missile defenses because of their speed and maneuverability.

A US-led diplomatic push aimed at convincing North Korea to abandon its nuclear weapons program collapsed in 2019 after the Trump administration rejected the North’s demands for major sanctions relief in exchange for a partial surrender of its nuclear capabilities.

Kim has since pledged to further expand a nuclear arsenal he clearly sees as his strongest guarantee of survival, despite the country’s economy suffering major setbacks amid pandemic-related border closures and persistent US-led sanctions.

His government has so far rejected the Biden administration’s call to resume dialogue without preconditions, saying that the United States must first abandon its “hostile policy,” a term Pyongyang mainly uses to describe sanctions and combined US-South Korea military exercises.