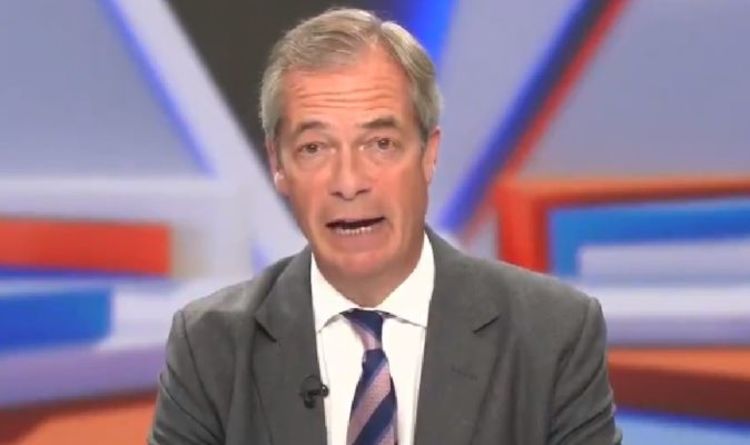 Nigel Farage has slammed the SNP in a brutal rant after the GB News host was asked to provide a verdict on Nicola Sturgeon‘s handling of Covid. Mr Farage told GB News viewers to be in little doubt that the SNP is a “hard-left” party that would lead an independent Scotland to a “financial disaster.” He went on slam Ms Sturgeon’s handling of Covid arguing the First Minister had simply looked to be “one step ahead of whatever Boris Johnson is doing.”

He said: “Sturgeon is trying all the time isn’t she to be one step ahead of whatever Boris Johnson is doing.

“And trying at all times to centralize as much power in government as she possibly can.

“That is what the extreme left of politics has been doing for over a century, and that is what she is.

“Be in no doubt the SNP is a hard-left political party.

“If Scotland ever broke away from the United Kingdom they would have a financial disaster,” he added.

He said: “I’ve met all sorts of political leaders… personally I found her… one of the most difficult… people I’ve come face to face with.

“She probably thinks exactly the same about me.”

“She speaks extremely eloquently, she is very good at turning the tables on everything that happens.

“You only have to take apart the speech to has just given today.

“It is full of things that would lead the population to think ooh dear, oh gosh, you know Brexit has caused food shortages, but anyone with any sense or research knows that actually, those food shortages are due to the difficulties in moving goods around.

“Because of the Covid restrictions and lorry drivers are having real problems crossing boundaries and there is a difficulty in transporting goods, lorry drivers aren’t willing to go and end up quarantined somewhere for weeks on end.”