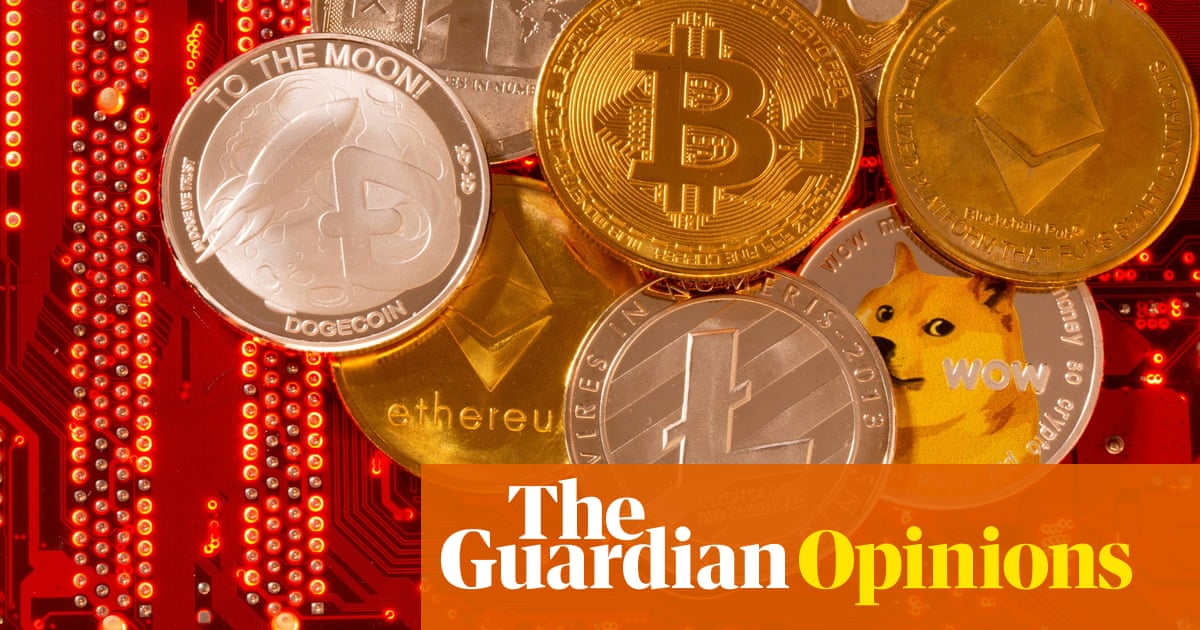 Cryptocurrencies, according to their most ardent supporters, are supposed to supplant nations’ existing currencies and end central banks’ control over the money supply. Instead, individuals will be able to trade with each other in a decentralised, digital financial ecosystem. This is a good thing, they promise, because unlike states and their central banks, technology is incorruptible. Crypto-evangelists imagine technology as a replacement for social and political institutions.

But technology never replaces social and political behaviour; it merely alters the rules and norms we follow. To see this in action, one need only look at the plummeting value of Terra Luna, a crypto token that crashed by 98% in a day, causing some investors to lose their life savings; the plunging value of Bitcoin and Ethereum; or the countless scam victims whose non-fungible tokens (NFTs) have been stolen. NFTs use the same blockchain technology as cryptocurrencies, such as Bitcoin, to trade algorithmically generated illustrations that riff on a theme. On offer are cartoony Bored Apes, Lazy Lions and “CryptoDickButts”. Although NFTs are aesthetically uninspiring, they can sell for as much as $91.8m – and as they have grown in value, scams involving stolen NFTs have abounded. Just last month the Bored Ape Yacht Club’s Instagram account was hacked, and the perpetrators stole about $3m worth of NFTs by directing followers to a fraudulent site.

When a scammer steals a CryptoDickButt, all the ecstatic manifestos about the decentralised power of the blockchain disappear, as scam victims plead with the handful of crypto exchanges to block the sale of their stolen NFT. The underlying technology and its tokens might be decentralised (and even that claim is questionable, given that cryptomarkets are wildly concentrated in the hands of a few hundred people), but where you can actually buy, use and sell these things is still limited to a few services and exchanges. This forces crypto fans to recognise a hard truth: currencies and contracts are only as valuable or enforceable as the people and institutions that recognise their legitimacy. Blockchain technology does not change this fact whatsoever.

In turn, states and institutions have begun to treat crypto as a potentially destabilising geopolitical force, capping and taxing the ravenous amounts of energy that crypto mines consume. The crypto mining industry already consumes 0.55% of global energy production – about as much as a small country. Some have gone so far as to put the kibosh on blockchain technology altogether. China effectively banned the mining and use of cryptocurrencies in late 2021; prior to that, the country was far and away the largest bitcoin miner by volume, accounting for as much as 75% of global volume in September 2019. Its reasons for banning crypto are likely a combination of curbing the power consumption of crypto mines, protecting citizens from scams and controlling the flow of money both within the country and with China’s trading partners. To date, China is the only government that has made an aggressive move towards ridding itself of this technology, but other nations face similar problems.

Russia has been learning this lesson in the last few months, starting in January when crypto miners set up shop in nearby Kazakhstan after getting kicked out of China. Their mining servers took a heavy toll on the central Asian nation’s electricity grid, usingas much as 8% of its total energy-generating capacity as they swiftly became the second-biggest crypto producer behind the United States. Despite efforts to control the industry through energy taxation, citizens in Kazakhstan rioted over high fuel prices and unreliable electricity. Russian and neighbouring nations’ troops were called in to quell the violence in January, even as most of their attention was focused on Ukraine.

The war in Ukraine is proving to be different but an equally decisive moment for the geopolitics of crypto. The vice prime minister of Ukraine, Mykhailo Fedorov, announced on 3 March that his government would issue an NFT to raise money for the war effort. So far, the Ukrainian government has raised $50m-worth of crypto since the war began, though there has been little reporting on exactly who is raising money for arms in Ukraine this way. Alex Bornyakov, deputy minister of digital transformation of Ukraine, has only said that “most donations come from people,” while others come from companies.

Russia itself is a big player in crypto, supplying 11% of the world’s Bitcoin mining capacity. Oligarchs in the country must be grateful, given that trading between the Russian rouble and crypto assets has doubled since the assault on Ukraine began. Getting around sanctions by converting rouble to crypto assets seems to be working for now, but that might end soon. Just as scam victims are quick to request that NFT trading sites blacklist a stolen Ape, crypto exchanges are under pressure to bar Russians from their platforms. There’s been robust debate in the industry as to whether this is antithetical to the whole idea of the technology, but the point is this: crypto has not brought about a financial revolution, it’s just given states and scam artists a new piece to play on the grand chessboard.

This is only the beginning. Churning out inscrutable financial assets using coal-powered electrical grids is contributing to a rapidly warming planet that is already experiencing the worst droughts seen in more than 1,000 years in California and supercharged monsoon seasons in India. All the ethereal imagery associated with crypto obscures the fact that it is made up of millions of tons of coal, copper, rare earth metals and plastic. The servers that mine crypto exist on the planet in real countries with laws, wars and resource shortages – which are governed by politicians that have real commitments and interests. With the Russian invasion of Ukraine, we are beginning to see an emerging geopolitics of crypto that looks very much like the old world of banking and finance.