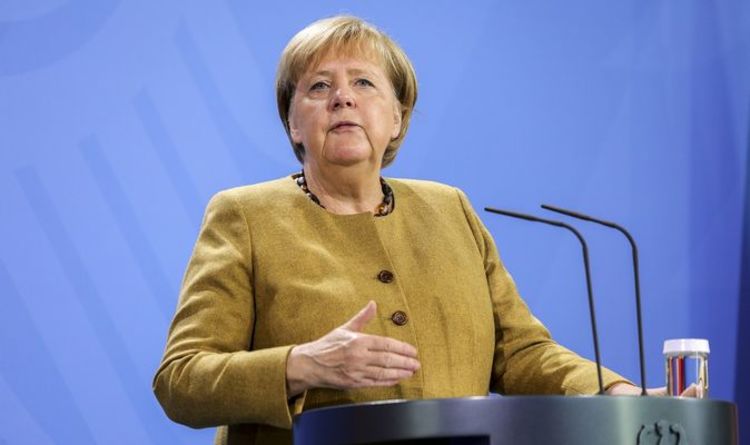 Back in 2018, the German Chancellor announced she would stand down as leader of the CDU at the party convention. Armin Laschet was announced as the new leader of the party after beating rival Friedrich Merz in a digital leadership election.

Last month, the German public voted for their next leader and the centre-left Social Democrats (SPD) claimed victory.

The Social Democrats effectively won the German election, making leader Olaf Scholz the most likely next Chancellor of a coalition government in Europe’s largest economy.

Ms Merkel will stay in a caretaker role until a coalition government is formed.

However, the close result suggests it could take time to determine who will govern, with difficult coalition negotiations involving a number of parties to come.

But Germans have turned against the outgoing Chancellor as the country suffered its biggest inflation surge in 28 years.

A new article on German outlet, Bild, dubbed Ms Merkel the “Icy Chancellor” and accused her of “ignoring” the rising costs of fuel, electricity and gas.

In the article, the unnamed reporter claimed several gas providers are “cancelling contracts with their first customers and no longer accept new ones”.

They write: “Business associations and consumer advocates agree like rarely before: Politicians have to act!”

Throughout September, consumer prices were 4.1 percent above the level of the same month last year.

For August, statisticians reported an increase in import prices of 16.5 percent over the previous year.

According to the Federal Statistical Office, the last time the Wiesbaden authority put a four before the decimal point was back in December 1993, when it was at 4.3 percent.

“So far, it has been safe to say that the rise in inflation is temporary.

“But the now significantly higher raw material prices are changing the starting position.”

Imported goods rose by almost 17 percent – as much as they did during the second oil crisis in 1981.

Over the years, natural gas imports rose by 178 percent, with electricity rising by 136 percent year-on-year.

Coal and iron ore have also seen the price of imports rise by 118 and 97 percent respectively.

Mr Gitzel warned the higher gas prices could have an impact on electricity prices.