Skip to content
HomeNewsMerkel crisis: Europeans warn Germany is a declining force ahead of crucial election 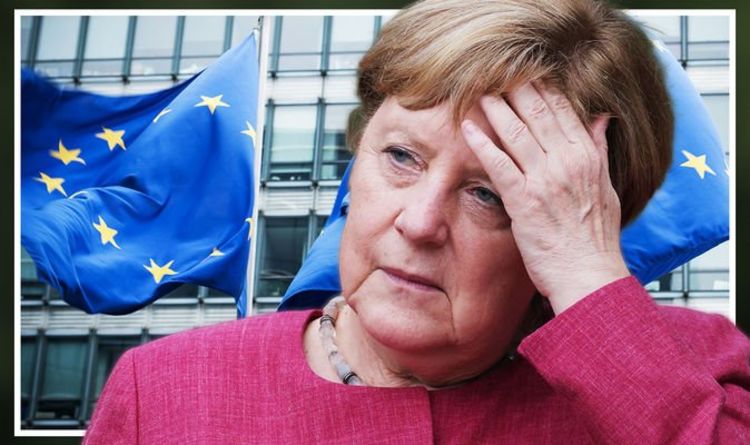 A majority of Europeans feel that the country’s status is fading ahead of this month’s federal elections. The study by the European Council on Foreign Relations found that 34 percent of respondents believe Germany’s golden age is a thing of the past. And 21 percent say German Chancellor Mrs Merkel is currently guiding the country through its peak of prosperity.

A mere 10 percent of Europeans say that Germany’s golden age is still to come.

The ECFR surveyed people from across 12 European Union member states on their feelings about Germany’s position in the EU and the world stage.

A majority of those quizzed in Germany, Austria and Hungary see Germany’s past as more glorious than its present.

A report drawn up by the ECFR stated: “It is intriguing that a plurality of Europeans believe Germany’s golden age is in the past but would choose Merkel as president of Europe over Macron.

“This suggests that it is not only in Germany but also in Europe more broadly that Merkel as a political figure is more popular than the results of her rule.

“Without Merkel, the foundations of Germany’s leadership role in the EU will be significantly weaker – unless the new government implements a credible strategy that goes beyond Merkelism.”

Mrs Merkel is seen as a powerful leader and her departure seems to coincide with the opinions of a less influential Germany.

The departing German Chancellor has been seen as a great unifier in the wake of Britain’s Brexit referendum and the turbulent years for transatlantic relations under former US President Donald Trump.

As a result, EU citizens appear to favour selecting Mrs Merkel as an “EU president” over her French counterpart Emmanuel Macron.

Asked which candidate Europeans would pick for the fictional role, respondents overwhelmingly backed the German.

In the Netherlands, Spain, Portugal there was a genuine majority for the German, with her scores outweighing Mr Macron, “I would not vote” and “don’t know” options altogether.

The study comes at a time when polls in Germany suggest Mrs Merkel’s conservative coalition is expected to be unseated.

The ballot is seen as crunch because it is the first she has not gone into as a candidate for chancellor.

Jana Puglierin, co-author of the report and a senior policy fellow at ECFR, said: “The key challenge, for whoever wins next week’s election, will be to convince Germans that a serious shift is required in how their country engages with the EU.

“The approach of putting EU cohesion above all else, which has shaped much of the EU’s policy agenda during the Merkel era, could prove a tempting and immediate pathway for her successor.

“However, in the face of international crises, and domestic concerns about Germany’s role within the EU, a strategy of ‘more of the same’ is unlikely to hold.

“For Germany to retain its status as the leading driver of EU policy, it will need to engage with the issues that are important to its citizens, and provide its European partners with clear-cut ideas about how the EU can compete in a divided and crisis-shaken world.

“Merkel’s successors will need to demonstrate why a post-Atlanticist approach to foreign policy is now key, while at the same time selling the importance of German leadership in the bloc to their voters at home. They can no longer afford to remain neutral or pursue the status quo. It is time for Berlin to take sides.”