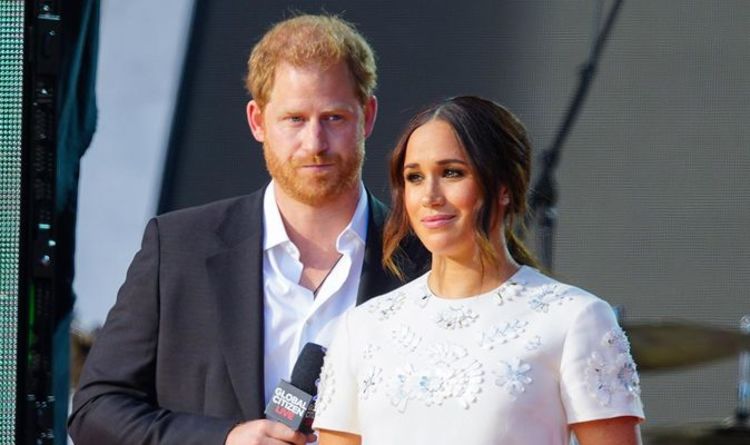 Prince Harry, 36, and Meghan Markle, 40, signed multimillion-dollar contracts with Netflix and Spotify to create content for the platforms after leaving the Royal Family in March 2020. But the Sussexes have not released anything since. Discussing the recent downturn in Netflix subscriptions, royal expert Neil Sean has claimed there is added “pressure” on the Duke and Duchess of Sussex to release content.

Speaking on his YouTube channel, Mr Sean claimed: “This puts a lot more pressure on them not only to deliver but to make sure they deliver with a huge audience and if their deal is to move forward. into the second phase.

“That is, of course, the second payment then they will need to see something soon.

“More importantly whet the appetite of the worldwide public and by that I mean, some kind of trailer, picture or proof that something’s going on.

“Harry and Meghan are novices at this particular thing so the money that they already have from Netflix will really be eaten up by the professionals who undertake it.”

However, royal commentator Omid Scobie has claimed after months of leave for the royal couple, they are getting ready for a “busy period”.

He said royal fans will see why their move to the US was “so important to them”.

Speaking to Good Morning America, Mr Scobie said: “One of the lessons learned by the couple was it’s ok to slow down.

“We saw them jump from one big project to the next especially when they moved over to the US but they’re on parental leave at the moment, enjoying that important family time from home.

He added: “This is finally going to be a chance to see them showing us what they’re doing in the US and why that move was so important for them.”

Following the Netflix deal, the Duke of Sussex paid back the £2.4million of taxpayers’ money used to renovate Frogmore Cottage.

A spokesman for Harry confirmed the Duke had paid the bill in full by making a contribution to the Sovereign Grant.

The payment was made possible thanks to the Duke and Duchess of Sussex’s new multi-million pound Netflix deal, a source said.