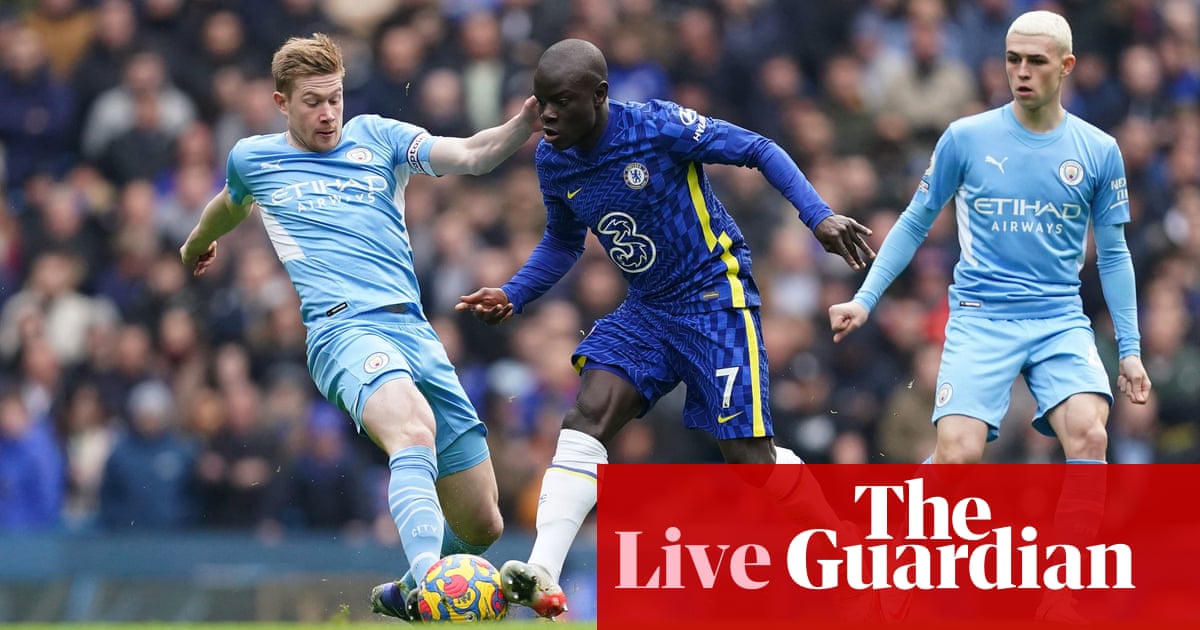 7 min: Sterling skins Alonso down the right and is cynically clipped by the Chelsea left back. He goes in the book, and it’s going to be a long afternoon now.

6 min: Walker has already given the ball away a couple of times. This is his first Premier League start since getting himself stupidly sent off against Leipzig in the Champions League, so he’ll be in the process of shaking off some rust.

5 min: Kepa redeems himself by plucking the corner from the sky. No fuss this time.

4 min: Yet another long pass, this time by Laporte down the left for Grealish. Kepa races out of his box to clear, but only manages to shin it into his own player, Azpilicueta. He’s fortunate that the resulting ricochet flies wide left of the unguarded goal. First corner of the match coming up.

2 min: … and now De Bruyne nearly releases Silva down the left. Azpilicueta was on point and intercepts. A determined start by the champions.

Here we go, then. Chelsea get the ball rolling … but only after everyone takes a knee. A gesture met with firm approval. There’s no room for racism.

The teams are out. They’re blue, ba-da-be, City wearing sky, Chelsea royal. Anticipation and excitement crackling around the Etihad. We’ll be off in a couple of minutes!

Thomas Tuchel has a word with BT. “Even if we had everybody available, it can never be a must-win game at the Etihad. Let’s respect what City is in the moment, they are very strong, and let’s be realistic about us, but we are up for the game and will try to find solutions to win. We will hunt them down and make them under-perform. There is a lot to do.”

Pep Guardiola talks to BT Sport. “Thomas Tuchel changes the shape in many games, sometimes during games. They will be more aggressive than they were at Stamford Bridge, because he said that in the press conference! They will be more aggressive in their build-up, and in all departments. They have top quality up front. It is a huge challenge, they are European champions, we know that. But we will try to do a good performance and deserve to win.”

The state of play. Chelsea don’t quite need a miracle yet, but they do need a win. Should City prevail this lunchtime, you’d expect the Premier League trophy to stay put at the Etihad. Liverpool will presumably be watching with interest, more in hope than expectation.

This is, of course, a game between the champions of England and the champions of Europe. It’s also a replay of last year’s Champions League final. A reminder of that, should you require one, and/or fancy reliving it.

In which Chelsea desperately try to keep the title race alive. Kick off is at 12.30pm. It’s on!