Skip to content
HomeNewsMan allegedly pushed partner off roof, then faked accident to get to her in hospital

Prosecutors on Thursday filed an indictment against an Israeli man for attempting to murder his girlfriend by pushing her off a roof in 2018.

In July 2018, 32-year-old Shaul Karni pushed his Colombian girlfriend from the roof of a three-story building in the settlement of Etz Efraim amid a heated argument about their relationship, officials said.

The woman was seriously hurt in the incident, and eventually returned to Colombia — where the couple had first met — with their daughter.

At the time, police opened an investigation into how the woman was hurt, but closed the case due to lack of evidence.

A month after the attempt on his partner’s life, Karni staged a car accident in order to be hospitalized at the same hospital the victim was in and get to her, prosecutors charged. He was taken by ambulance to the hospital, but was unable to locate her there, the indictment read.

On October 29, Karni turned himself into the police, confessing to the crime, a law enforcement spokesperson said. Thursday’s indictment charged Karni with attempted murder, which means he could face up to 20 years in prison.

The victim — living in Colombia with unspecified physical ailments due to the attempt on her life — gave detailed testimony on the incident in recent weeks, prosecutors said.

The indictment comes days after the government announced the allocation of NIS 155 million (approximately $50 million) for a national plan to combat violence against women.

Police and social services organizations have reported a major rise in domestic violence complaints since the start of the coronavirus pandemic. 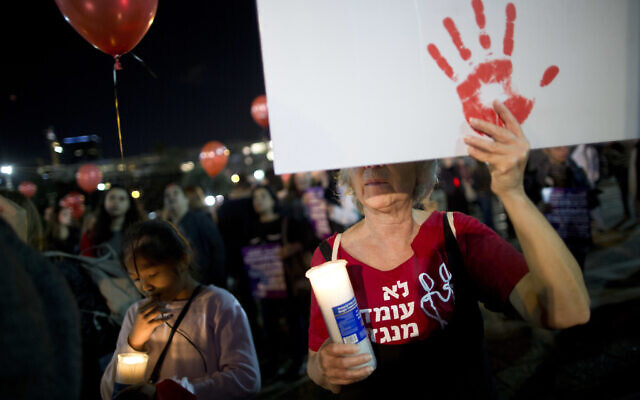 Illustrative: A protest against violence against women in Tel Aviv, on December 4, 2018. (AP Photo/Oded Balilty)

Statistics published by the Welfare and Social Affairs Ministry last week showed an increase in calls to the ministry’s domestic violence hotline this year.

According to the figures, 7,977 calls were made to the hotline through the end of October, an increase of 10 percent over the same period last year. Of those calls, 4,382 were to report violence against a woman by her partner.

The hotline, which can be reached by dialing 118, is available in Hebrew, Arabic, English, Russian and Amharic.

The figures were released ahead of the International Day for the Elimination of Violence against Women, which is marked around the world on November 25.

Amy Spiro contributed to this report.