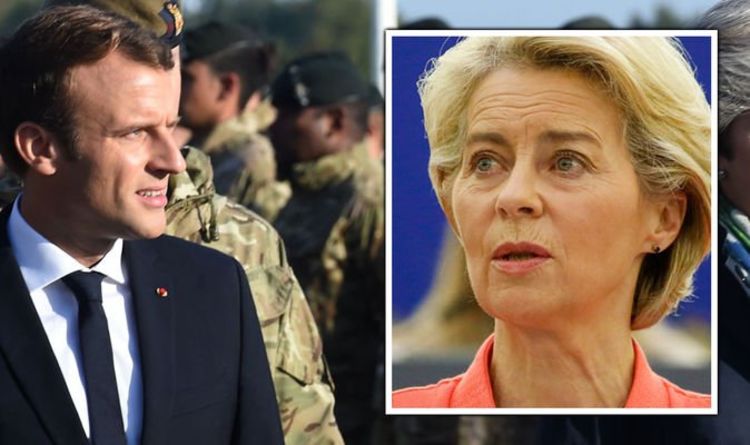 It was unveiled today that the French President will use his time in charge of the EU’s six-month rotating presidency to champion a bolstering of the bloc’s military capabilities. European Commission President Ursula Von der Leyen said the pair would convene a summit of EU leaders next year to discuss the issue. The gathering was announced during the Brussels boss’s State of the Union speech to the European Parliament in Strasbourg.

She used the occasion to accuse EU leaders of not having the “political will” to use Brussels-led “battlegroups” to intervene in military conflicts.

Paris is a leading light in the push for further military integration.

The drive has been accelerated in the wake of the upheaval in Afghanistan, when European nations were forced to abandon their evacuation programmes after the withdrawal of US troops from Kabul’s international airport.

As a result, more European capitals believe there is a need to ensure the bloc is less reliant on US-led military operations in the future.

Discussing the issue today, Mrs von der Leyen said: “The European Union is a unique security provider. There will be missions where NATO or the UN will not be present, but where the EU should be.”

The Commission President added: “The good news is that over the past years, we have started to develop a European defence ecosystem.

“In the last weeks, there have been many discussions on expeditionary forces. On what type and how many we need: battlegroups or EU entry forces.

“But the more fundamental issue is why this has not worked in the past.

“You can have the most advanced forces in the world – but if you are never prepared to use them – of what use are they?

“What has held us back until now is not just a shortfall of capacity – it is the lack of political will.”

France will urge fellow EU governments to consider the possibility dropping the requirement for all leaders to support military intervention.

There is also plans in the pipeline to further integrate defence policy.

Mrs von der Leyen pitched the possibility of dropping VAT on military equipment made in the bloc.

She believes this will convince EU countries to do their equip their armed forces with European technologies.

She said that “illusions of European strategic autonomy must come to an end” and that “Europeans will not be able to replace America’s crucial role as a security provider”.

Mr Macron said he disagreed “profoundly” with the German’s comments.