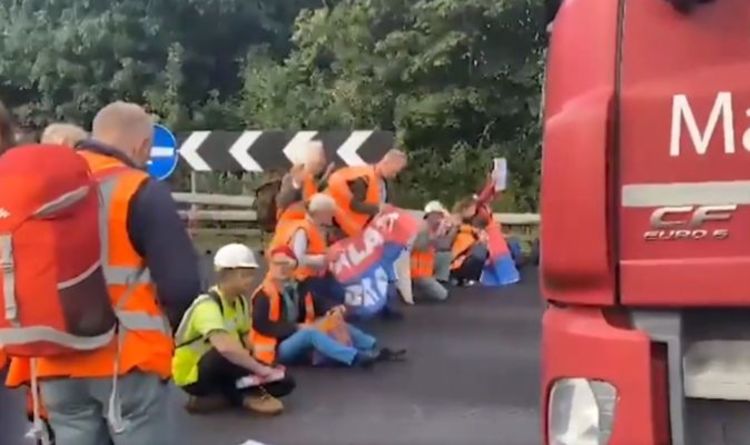 The clip shows approximately ten people in fluorescent jackets crouching down in front of a lorry on the busy motorway, which circles London, at South Mimms in Hertfordshire. One angry road user can be heard complaining bitterly about their demonstration, while horns blare loudly in the background.

Insulate Britain, which is demanding Government action on home insulation, has stopped traffic at several sections of Britain’s busiest motorway.

The pressure group, which tweeted footage from the scene, commenting: “#InsulateBritain are back.

“@BorisJohnson can you hear us yet?”

Similar protests on Monday resulted in the arrests of 77 people.

On that occasion there were protests at junctions 20 for Kings Langley, Herts, 14 for Heathrow terminal four, three for Swanley in Kent, six for Godstone, Surrey and 31 for Lakeside, Essex, on Monday.

Police were first called at about 8am, with all junctions fully reopened by lunchtime.

“Whilst I support the cause whole heartedly, this is not a way to get popular support. #InsulateBritain #M25”.