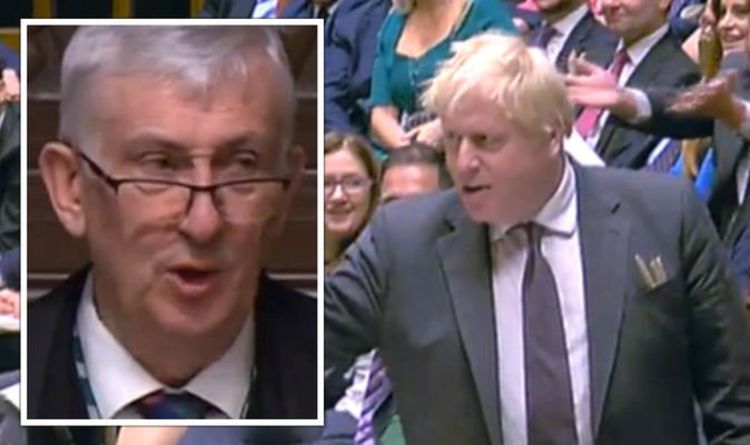 Labour leader Keir Starmer hit out at Boris Johnson for his plans to cut Universal Credit during a fiery debate in the House of Commons. In a skit that saw Labour MPs shouting “up” along with Sir Keir, the Prime Minister described it as “pantomime”. He said: “Mr Speaker, I see the panto season has come early.”

After an eruption of laughter in the house, Sir Lindsay added: “Order. If it is, it’s certainly behind you.”

Sir Keir highlighted how nurses, supermarket workers and teaching assistants stand to lose more than £1,000 each under the Government’s Universal Credit cut, adding: “At the same time the Prime Minister wasted billions on crony contracts, cut taxes for people buying second homes and handed out super-tax deductions for the biggest companies.

“So why is the Prime Minister choosing to take a tax system that is already loaded against working people and making it even more unfair?”

READ MORE: M25 protests cause chaos as woman blocked from daughter in labour

Mr Johnson replied in the Commons: “It is absolutely ridiculous that he should attack the Government over salaries for nurses when we’ve put them up by 3%, on top of the 12.8% rise that we introduced, when we’re hiring 50,000 more nurses and when we’re just putting another £36 billion into the NHS and social care on top of the £33 billion that this Government invested when we came into office.”

Mr Johnson highlighted lengthy waiting lists, claiming his Government has a plan to deal with this.

Sir Keir countered: “I just wonder what the millions of people facing a £1,000 cut to their wages will think of that.”

“Then there will be additional childcare and travel costs, so making up that stolen cash is impossible and the minister knows it.

“Our members have told us that the £20 isn’t paying for luxuries, but for food, children’s shoes, school uniforms and warm clothes.

“The Chancellor is making a deliberate and cruel decision to punish the country’s working poor, pushing six million people, over a third of which are already in work, into poverty and debt overnight.

“Many of them have worked right through the pandemic – in social care, in the NHS and as refuse collectors – and they deserve so much better from this Government than this assault on their already poverty-level incomes.

“Unite Community members will not rest in their determined efforts to fight against this needless hardship. Tory ministers and MPs will never be allowed to forget what they are doing to our children and communities.”