AP — The seditious conspiracy case against members and associates of the far-right Oath Keepers militia group marks the boldest attempt so far by the government to prosecute those who attacked the United States Capitol, but invoking the rarely used charge carries considerable risks.

Still, legal experts who have reviewed the indictment unsealed this past week against Oath Keepers founder Stewart Rhodes and 10 others said prosecutors stand a good chance of winning convictions on allegations that the defendants were working together to use force to stop the peaceful transfer of presidential power.

The Civil War-era charge is hard to prove, and scholars say overzealousness in applying it, going back centuries, also discredited its use.

The experts who examined the indictment against the 11 Oath Keepers members and associates said the government’s case is supported by detailed allegations that participants in the plot discussed their plans in encrypted chats, traveled to the nation’s capital from across the country, organized into teams, used military tactics, stashed weapons outside Washington in case they felt they were needed and communicated with each other during the riot on January 6, 2021.

“This is as good a case as you could bring,” said Carlton Larson, a law professor at the University of California at Davis who is an expert in treason law.

In the weeks leading up to the insurrection, the indictment alleged, Oath Keepers discussed trying to overturn the results of the 2020 presidential election, preparing for a siege by purchasing weapons and setting up battle plans. 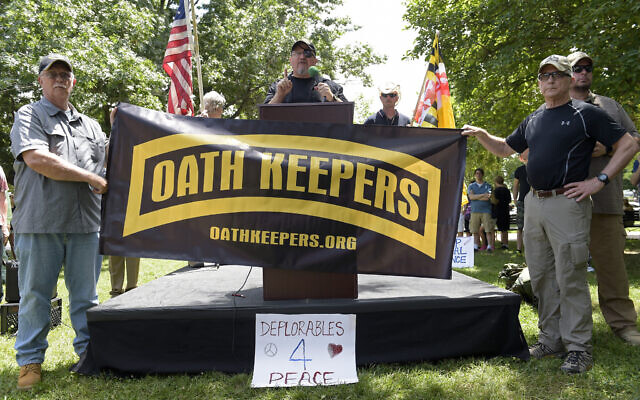 Stewart Rhodes, founder of the citizen militia group known as the Oath Keepers, center, speaks during a rally outside the White House in Washington, DC, on June 25, 2017. (AP Photo/Susan Walsh, File)

“We aren’t getting through this without a civil war. Too late for that. Prepare your mind, body, spirit,” the indictment quoted Rhodes as writing in a November 2020 chat after then-US president Donald Trump was projected to have been defeated by Democrat Joe Biden.

Authorities say several members of the Oath Keepers shouldered their way through the crowd on January 6 and into the Capitol in a military-style stack formation. Group members are accused of setting up “quick reaction force” teams that stationed weapons outside of Washington and were prepared to deliver arms to group members and associates if they believed the need arose.

In late December 2020, Rhodes wrote in a chat that the only chance Trump had to succeed in overturning the election outcome was if he and the Oath Keepers frightened members of Congress and “convince them it will be torches and pitchforks time is [sic] they don’t do the right thing. But I don’t think they will listen,” according to the indictment.

Rhodes did not enter the Capitol building on January 6, but authorities say he was communicating with Oath Keepers outside on the Capitol grounds. Phillip Linder, one of the lawyers representing Rhodes, said his client intends to fight the charges. Rhodes remains jailed in Texas and has a detention hearing this coming Thursday.

“We believe he is not a flight risk, not a danger and should be released,” Linder said after Rhodes’ first court appearance on Friday.

Rhodes has said in interviews with right-wing hosts that there was no plan to storm the Capitol and that the members who did so went rogue. But he has continued to push the lie that the 2020 election was stolen. 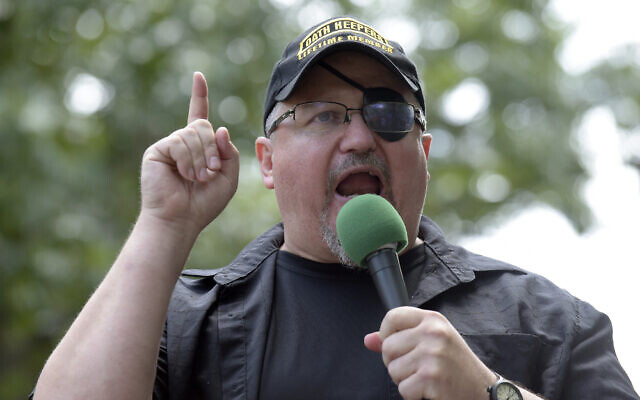 In this file photo from June 25, 2017, Stewart Rhodes, founder of the Oath Keepers, speaks during a rally outside the White House in Washington, DC. (AP Photo/Susan Walsh, File)

University at Albany assistant professor Sam Jackson, author of the book “Oath Keepers: Patriotism and the Edge of Violence in a Right-Wing Antigovernment Group,” said it wasn’t clear to him before the indictment whether Rhodes or Oath Keepers leaders were involved in a plot to attack the Capitol.

“Now it’s clear that that is the case,” he said. “It’s also clear that national leadership was not solely focused on some anticipated or perceived threat from antifa or other opponents of Donald Trump. But they really were thinking about, ‘OK, how do we prevent the certification of the Electoral College vote if members of Congress don’t see things the way that we do?’”

The last sedition case was filed in 2010 against members of a Michigan militia. Two years later, they were acquitted by a judge who said their hateful diatribes didn’t prove they ever had detailed plans for a rebellion.

Lawyer William Swor, who represented Hutaree militia leader David Stone, said prosecutors in the decade-old case failed to prove that group members were “more than just talking” and were “actively planning to oppose the government.”

Among the last successful convictions for seditious conspiracy stemmed from the storming of the Capitol in 1954 when four Puerto Rican nationalists opened fire on the House floor, wounding five representatives. 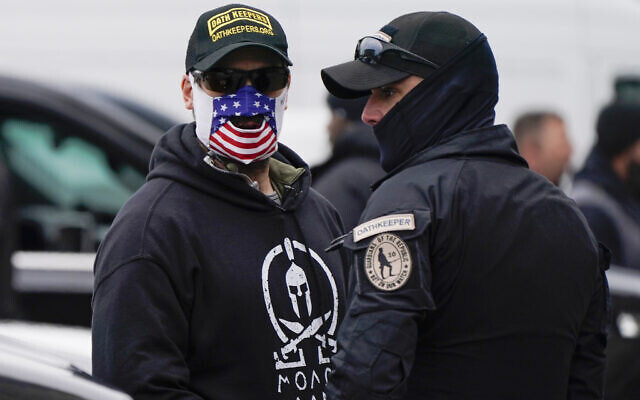 People wearing hats and patches indicating they are part of Oath Keepers attend a rally at Freedom Plaza, on January 5, 2021, in Washington, DC, in support of then-US President Donald Trump. (AP Photo/Jacquelyn Martin)

Mark Pitcavage, a senior research fellow at the Anti-Defamation League’s Center on Extremism, said the collapse of earlier sedition cases against far-right extremists suggests that judges and juries may have difficulty believing that a small group of people “seriously thought they could take on the entire US government.”

Pitcavage said prosecutors in the case against Oath Keepers appear to have a “tremendous amount of evidence about planning beforehand” as well as compelling video evidence of the group members storming the Capitol.

“That sort of evidence was largely missing from all these previous cases,” Pitcavage said. “Sedition cases, in my opinion, are always inherently risky to a certain degree. But I do think prosecutors in this case have a far stronger case to make for the jury than some of their predecessors did.”

If convicted of seditious conspiracy, the defendants could face a maximum prison sentence of 20 years, compared with five for the other conspiracy charges.

In all, more than 700 people have been arrested and charged with federal crimes in the January 6 riot. More than 70 defendants remain detained on riot charges. At least 186 defendants have pleaded guilty to riot-related charges as of Thursday.